Possible errors in the software could then be 'secretly' removed after market launch via update. In this way, safety-related problems could also be fixed without an official recall. — dpa

BERLIN: There’s ever more software in cars these days, and manufacturers are driving us towards the familiar smartphone model of regular updates bringing new features and improvements.

The goal, like on an iPhone or Android phone, is that updates will help existing vehicles to benefit from the latest innovations.

But you don’t need to bring your car to the garage to get it updated, the vehicle’s integrated cellular connection means that the data can be transferred wirelessly. This is called over-the-air updates, or OTA for short.

"The over-the-air update is the new facelift," says Magnus Östberg, who heads electronics development at Mercedes.

To be sure, car designers will continue to provide classic "facelifts," but in future they’ll only have to press the send button to do so.

"This will allow us to introduce innovations more quickly in the future and make them available to a broader customer base," says Östberg. "Instead of a rhythm of around three years in the past, innovations will then come every six months."

Östberg adds that customers won't have to do much. Ideally, the updates will run automatically in the background and the systems will update themselves.

Whereas in the past software updates to cars were mostly only for the infotainment or navigation systems, recently central functions have also become the focus of the programmers. "This is especially true for electric cars," says Stefan Moeller of rental company Nextmove.

Development times, especially for battery-related issues, are very short, according to Moeller, and the pressure is high to bring new technologies into series production at an early stage.

"That's why development continues step by step while the cars are already on the road," he says.

This means that energy management, charging performance or adaptive route planning, for example, can be optimised at a later date to shorten downtimes or increase range.

Thanks to OTA updates, subsequent improvements can be implemented more quickly and easily, and it’s also easier to fix software errors.

"Previously, they could only be turned off years later during a facelift, or you had to pull the ripcord with a recall," Moeller says. Now all it takes is the touch of a finger on the touchscreen and the new software is installed in the car.

The latest and most far-reaching example of this comes from the VW Group. There, software update 3.0 is being rolled out for the parent brand's ID models and their electric siblings at Audi, Skoda, and Cupra.

"With this, we are improving voice control, there are new graphics and indicators on the displays, the assistance systems are learning, the charging performance is being increased and the range optimised," says VW press spokesman Stefan Voswinkel.

However, some experts see a downside to the OTA model. One concern is that manufacturers could be tempted to launch a car that has not yet been fully developed onto the market, says German motoring organisation ADAC.

Possible errors in the software could then be "secretly" removed after market launch via update. In this way, safety-related problems could also be fixed without an official recall.

So far most updates have been free of charge, but the car industry is looking at charging money for more significant upgrades.

Jan Burgard from strategy consultant firm Berylls predicts a model of "functions on demand," which manufacturers hope will generate lucrative revenues long after the customer has bought one of their vehicles.

"So far, these are just little things like new lighting scenarios, comfort extras or nice gimmicks, but we're just getting started," Burgard says.

Mercedes software chief Östberg sees it the same way. He can imagine, for example, that people will no longer pay four figures upfront to get the Mercedes Drive Pilot that allows autonomous driving in their S-Class.

Instead they will book it on a daily or weekly basis when they require it, for example on a long motorway trip. – dpa 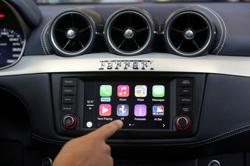