A man riding an electric scooter past a cafe with an extended terrace made of wooden pallets in Paris in respect for social distancing due to the Covid-19 coronavirus pandemic. — AFP

An industry that seemed existentially threatened at the start of the pandemic is showing signs of life.

In American and European cities that have made progress on reopening their economies, demand for electric scooter, bike, and moped rental services is growing, several companies have reported. Ford Motor Co’s scooter subsidiary, Spin, has seen an increase in absolute ridership in a handful of cities where lockdown restrictions have eased, including Baltimore and Detroit, the company said. Rival Lime reported record growth in new user signups and in ridership in some cities; its fleet in London hit 4.5 trips per vehicle per day in June, more than double pre-pandemic averages, according to a recent blog post by Wayne Ting, Lime’s chief executive officer.

To shop for groceries, grab take-out, and get to outdoor recreation areas, riders are replacing what many consider less safe trips by bus, train or shared car with battery-boosted conveyances that zip through open air. "I think it’s a reflection of expanding use cases that people are relying on scooters for,” said Euwyn Poon, president and co-founder of Spin of the evolving urban transportation landscape. The company operates scooters and bikes in about three dozen cities in the US and Germany. "We’re seeing a really optimistic trend around these kinds of vehicles.”

A recent McKinsey report found that while passenger-kilometers traveled on micromobility vehicles – both shared and privately owned – have declined 60% to 70% in Europe and the US so far this year, they are starting to show "a U-shape recovery”. And sharing services say they see longer trip distances and more rides originating within residential neighbourhoods rather than core commercial districts.

Lime reported a 34% increase in average trip durations from February to April of this year, as well as an increase in average trip distances, from 1.69 to 2.05 kilometers. Shared moped operator Revel measured similar upticks. Data from Spin provided by Populus, an urban transport analytics company, show significant growth in trips of two kilometers or longer in several cities, including Denver, Los Angeles, and Detroit, in May 2020, compared with a year earlier. (Comparing monthly ridership levels for the micromobility business is somewhat tricky. In most markets, it’s a seasonal business with more riders in warmer months. And because most operators have existed for only a few years, the number of vehicles in any given city has always fluctuated.)

Scooter usage especially highlights the shift. Downtown areas and adjacent neighbourhoods were formerly the hub of activity for scooter companies, with white-collar workers using the vehicles to commute short distances to work or to grab lunch or coffee near the office during the workday. But as many professionals around the world continue to work from home, residential neighbourhoods in some cities have become new micromobility hotspots, according to maps of Lime rentals in San Francisco and Berlin. Comparing the months of February and April – before and after lockdowns – the company said it saw an 8.6% increase in travel throughout the afternoon, with a decline during rush hour, across all of its active markets.

Another development is longer-term vehicle bookings from shared mobility providers. Spin now rents its scooters by the month in San Francisco; a similar option is available for e-bike rentals for delivery workers in Washington, DC. Unagi, a scooter maker that sells directly to customers, introduced a monthly subscription option for riders in L.A. and New York on Wednesday. Outside the US, the founders of SoundCloud launched a similar service last month in Berlin. Called Dance, it’s a rent-by-the-month, bike-by-delivery model akin to that of Buzzbike in London and Swapfiets in Amsterdam. Bird and Lime have offered monthly rentals for their vehicles since spring 2019.

Horace Dediu, a transportation and technology analyst who spearheads the annual Micromobility America conference, refers to this category of subscription-based vehicles as "personal micromobility” – in contrast with the more established by-the-minute model. "In the wake of Covid-19, the personally-owned market has exploded alongside the demand for open-air, socially distanced transportation,” Dediu wrote in a recent blog post.

For all the renewed interest, scooters continue to face challenges as a business model. The footprint of the micromobility industry remains significantly downsized from the start of 2020. While some individual operators can show growth in certain markets, the total number of scooter trips has fallen below 2019 levels in many US cities, including Portland and Austin. Also, there’s little evidence that the industry has led to reduced levels of car ownership.

In Christchurch, New Zealand – a city that has all but fully emerged from pandemic lockdowns – scooter ridership is about 20% below where it stood in early July 2019, according to data provided by Ride Report, a transportation analytics firm. Lime and Bird have withdrawn vehicles or paused operations during the pandemic in dozens of cities and university towns that they previously served, and laid off hundreds of employees. Spin serves just over half the communities it did in early 2020. With office and college re-openings in limbo, downtowns and college towns could remain unfriendly scooter territory for the foreseeable future.

Some players barely exist now: Jump, formerly Uber’s e-bike subsidiary, was acquired by Lime in early May as part of an US$170mil (RM712.04mil) emergency investment round in Lime led by Uber. Lime’s valuation fell nearly 80% amid that deal, the Information reported. Some investors are also reducing the value of their privately traded shares of micromobility startups: One venture capital fund from Fidelity Investments marked its holdings of Bird shares down to 34% below the 2018 purchase price, according to the Wall Street Journal.

Safety concerns continue to cast doubt on the viability of certain services, especially when used by first-time riders. Revel, which rents mopeds in a handful of US cities, had more than 153,000 new users sign up in New York from mid-March through late July. The company said absolute ridership recently surpassed 2019 levels. But on July 28, Revel suspended its service in New York following a string of crashes involving its vehicles, two fatal. A spokesperson said the company was reviewing "rider accountability and safety measures” and is "actively communicating with city officials” to restart operations. Revel vehicles can hit a maximum speed of 30 mph, and rentals include and require a helmet.

Still, the potential exists to turn what are viewed mostly as temporary travel choices, out of safety concerns, into longer-term habits, policy experts and investors say. "Assuming you wipe down the handlebar, scooters and bikes are risk-free from Covid,” said Bradley Tusk, CEO of Tusk Holdings and an investor in Bird. "So if people start using them for that and then decide it’s fun and healthy and they like doing it, that’s a good opening for new customers. Covid may create some opportunities that didn’t exist before.” As the industry continues to consolidate, those left standing, the recent McKinsey report predicts, will realise an improved business case and, in turn, an increase in profitability.

Activity could emerge, for example, from the new cycling routes and pedestrian corridors that cities have opened to accommodate socially distant travel. Harriet Tregoning, director of the New Urban Mobility Alliance, said that the decrease in vehicles on city streets during the pandemic could create a more inviting environment for scooters. Seattle, for example, has permanently closed 20 miles of streets to most non-emergency vehicles; Paris plans to allocate 50 kilometers of vehicle traffic lanes to bikes. "These are conditions that are really necessary to use these devices,” Tregoning said.

Also, government subsidies to reduce rental costs could lure more riders to more affordable rides. A partnership struck in the early days of the pandemic between Portland and Spin to waive the company’s operating fees and lift the city’s cap on its scooter fleet size led to a 46% rise in ridership.

If public and private sector leaders harness the moment to encourage these new commuter routines in a safe manner, it could bode well for goals to reduce urban congestion, emissions, and fatalities by decreasing the number of cars on the road, according to Molly Turner, a lecturer in cities and technology at UC Berkeley Haas School of Business and an adviser to Spin.

"If more people are getting comfortable using micromobility instead of their private vehicles,” Turner said, "hopefully, the habits they’ll form will mean bikes and scooters will be an equally valid option for the rest of their lives.” – Bloomberg 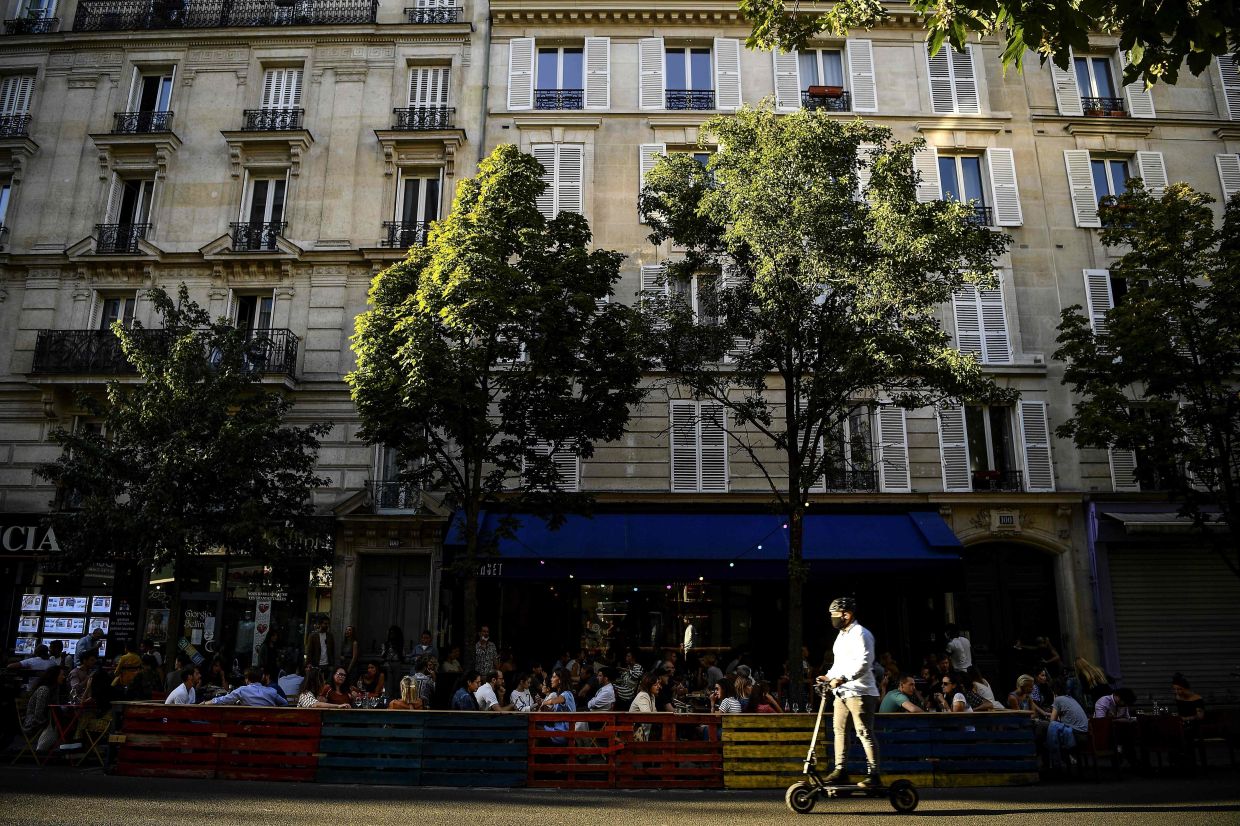 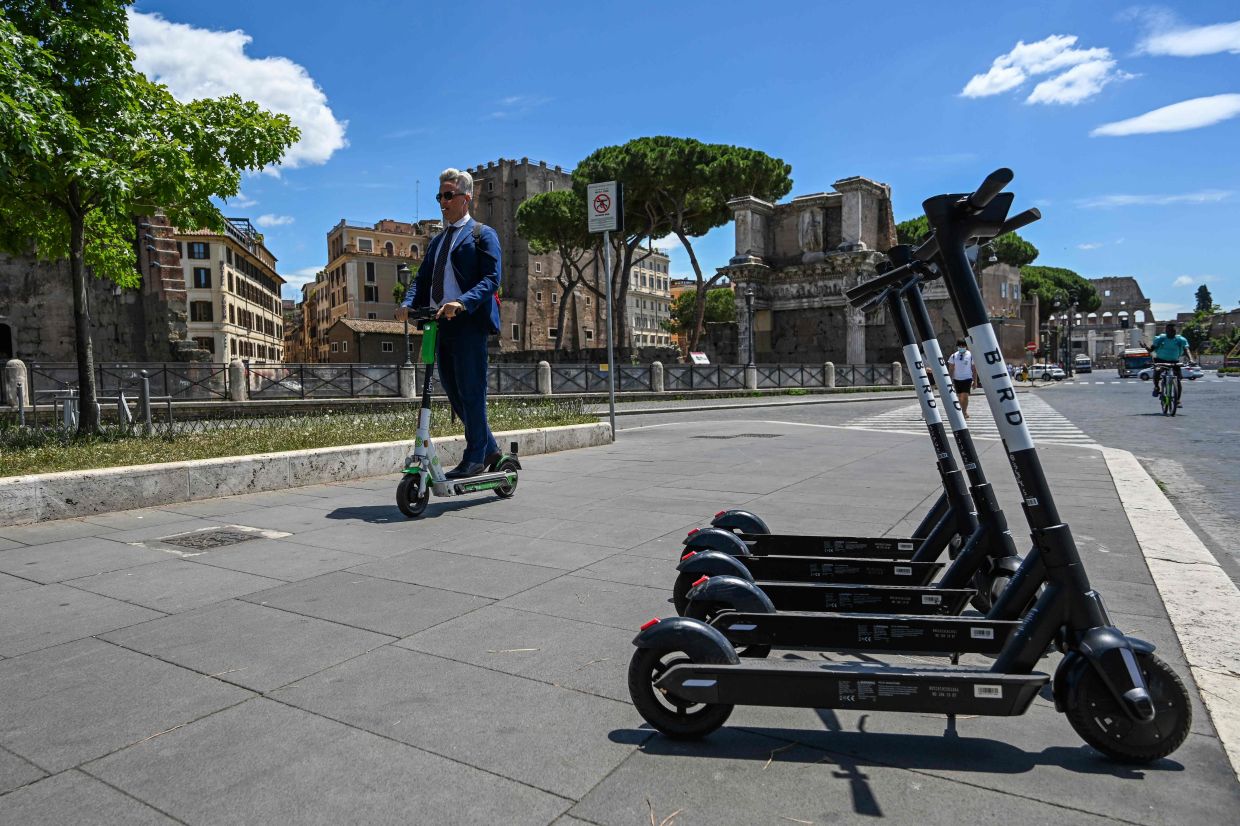 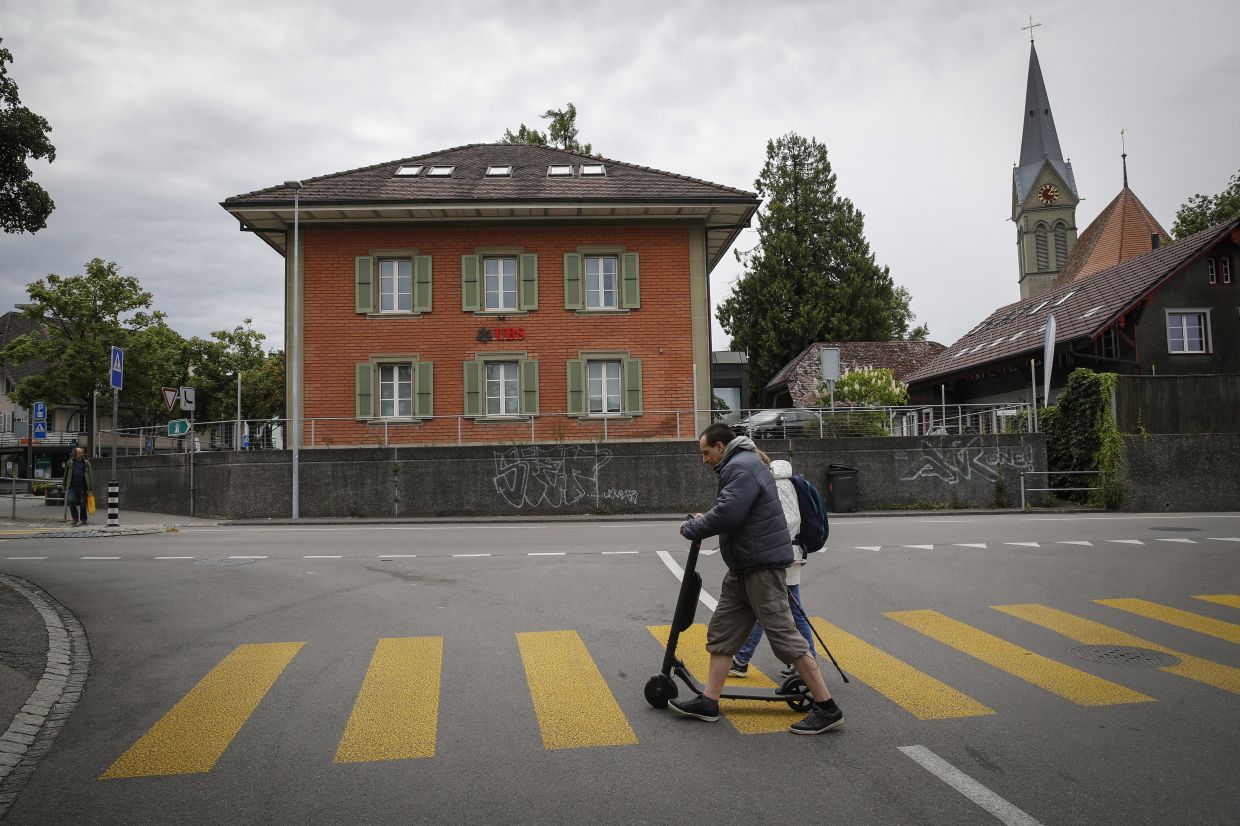 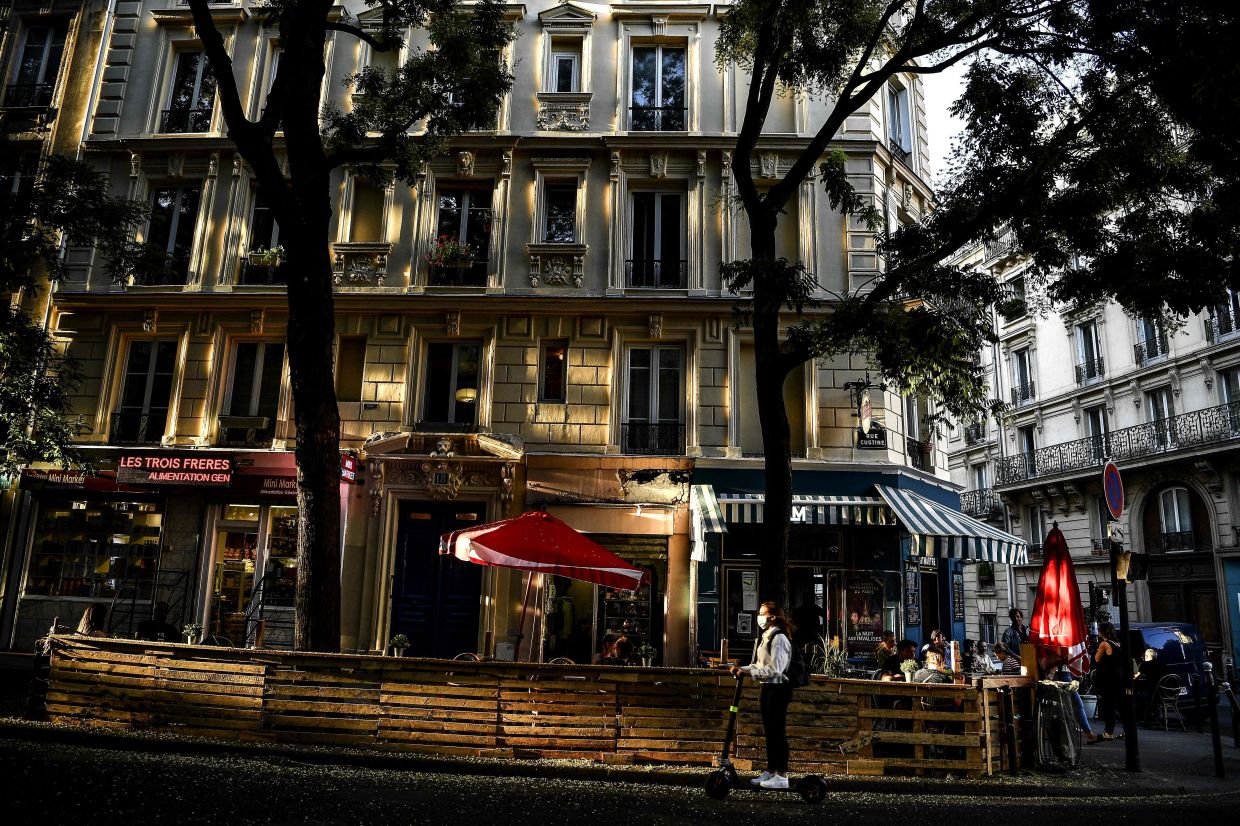 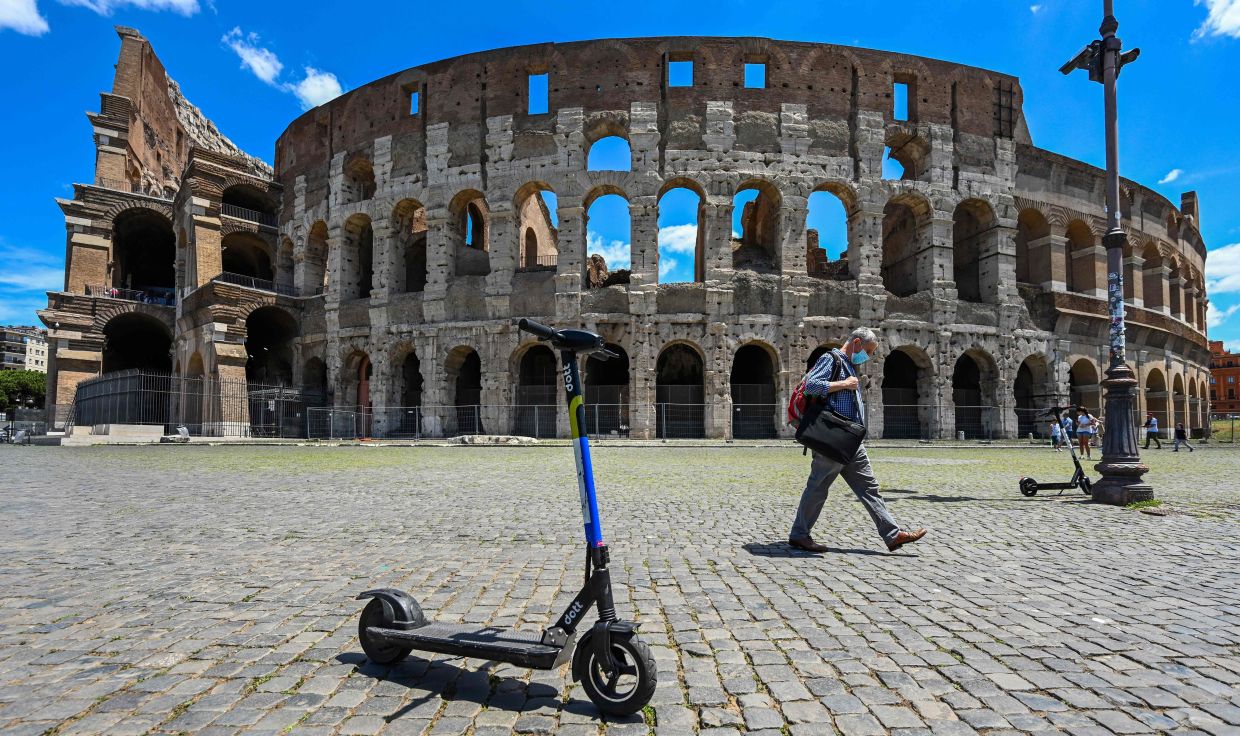 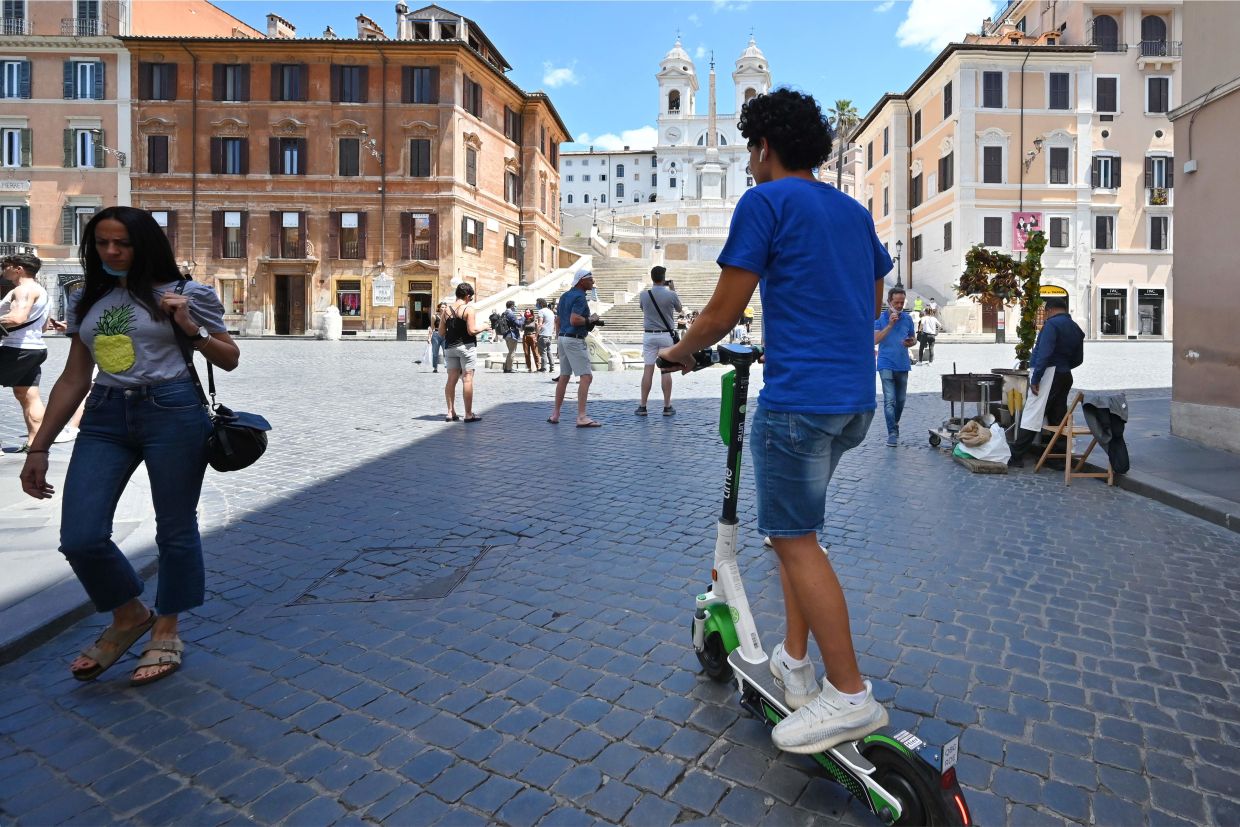 A man riding an electric scooter past a cafe with an extended terrace made of wooden pallets in Paris in respect for social distancing due to the Covid-19 coronavirus pandemic. — AFP

A man rides a shared electric scooter on June 22, 2020 in Rome, as the country eases its lockdown aimed at curbing the spread of the Covid-19 infection, caused by the novel coronavirus. With deconfinement and good weather, self-service shared electric scooters have invaded the streets of Rome in recent days, a novelty in the Eternal City, which in turn is discovering the joys and nuisances of new forms of mobility. — AFP

A pedestrian pushes an electric scooter across the road in front of a bank in Munchenbuchsee, Switzerland. — Bloomberg

A woman rides an electric scooter past a cafe with an extended terrace made of wooden pallets in Paris on July 22, 2020, in respect for social distancing due to the Covid-19 coronavirus pandemic. — AFP

A view of shared electric scooters parked in front of the Coliseum monument on June 22, 2020 in Rome, as the country eases its lockdown aimed at curbing the spread of the Covid-19 infection, caused by the novel coronavirus. With deconfinement and good weather, self-service shared electric scooters have invaded the streets of Rome in recent days, a novelty in the Eternal City, which in turn is discovering the joys and nuisances of new forms of mobility. — AFP

A young man rides a shared electric scooter on June 22, 2020 across Piazza di Spagna by the Spanish Steps in Rome, as the country eases its lockdown aimed at curbing the spread of the Covid-19 infection, caused by the novel coronavirus. With deconfinement and good weather, self-service shared electric scooters have invaded the streets of Rome in recent days, a novelty in the Eternal City, which in turn is discovering the joys and nuisances of new forms of mobility. — AFP