eSports athlete complains Streamyx too slow to train; TM upgrading him to Unifi

In a case of the squeaky wheel getting the oil, Unifi has said that it would make its fibre Internet connectivity available for a Malaysian eSports player following the gamer's complaints about slow Internet speeds at his home.

Izzurdin Hashim, who goes by the nickname Din 'Jumper', had posted on his Facebook page that the WiFi speeds at home where he subscribes to Streamyx was too slow for him to train for his eSports commitments.

Unifi, which like Streamyx is owned by Telekom Malaysia, said it had sent a network team to inspect and analyse Internet speeds at his home in Kuala Pilah, Negeri Sembilan.

"Based on our findings, the connection in his house is already at maximum speed for the package subscribed. However, we understand Din’s Internet connectivity requirements are demanding to say the least," the company said.

It added that the team had identified possible solutions to improve Izzurdin's Internet connection and are currently working on making Unifi available for him.

In Izzurdin's post, he said his Internet connection was at 10mbps with a ping of up to 100-150 milliseconds (ms), compared to an average of 20-30 ms for other players, which caused too much lag for him to train effectively.

For reference, a fast ping means a more responsive connection, especially in applications where timing is everything (such as video games), according to Google Fiber.

Izzurdin also said he was part of the Yoodo Gank team, which would be representing the country at the upcoming PUBG Mobile World League (PMWL), a global tournament for first-person shooter game PlayerUnknown's Battlegrounds (PUBG).

The team had won the South East Asian leg of the tournament last May and thus qualified for PMWL.

Although the team is sponsored by Yoodo, Izzurdin had said he depended on his WiFi when training at home, which he had mostly been doing during the movement control order (MCO) period. 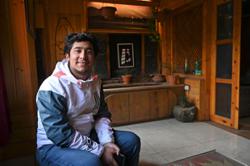