Saifuddin with (from left) Surina, MDEC chief operating officer Datuk Ng Wan Peng dan Boo after a meeting at his office at the Ministry of Communications and Multimedia. — Bernama

PUTRAJAYA: The special task force on Digital Malaysia, chaired by the Ministry of Communications and Multimedia (KKMM), will hold discussions on Internet access and quality as well as charges imposed by telecommunication companies following increased Internet usage during the Covid-19 pandemic.

Its Minister Datuk Saifuddin Abdullah said Covid-19 had imparted a lot of lessons, chief among them being that there were still areas with Internet connection speeds and quality that needed further improvement.

"Previously we expected, now we are sure there are certain weaknesses and we will rectify them,” he told reporters today.

"Learning from home is becoming increasingly important, so we will also identify where the weaknesses are,” he said.

Saifuddin said the cooperation should not only look towards the local market, but also expand e-commerce activities to the South-East Asia region, which holds a bigger market.

"If we only look at our country, it only involves about 32 million people. But if we look at the region, there are 650 million people and that is a very huge market,” he said.

Meanwhile, MDEC said in a statement that the Alibaba Group had agreed for its Electronic World Trade Platform (eWTP) at the Kuala Lumpur International Airport (KLIA) to function as one of its three global hubs, besides those in Belgium and Ethiopia, for the delivery of medical equipment to combat the Covid-19 pandemic.

"This will strengthen Malaysia’s role as a major trade hub in the region involving logistics operations as the global community continues its fight against the virus,” said MDEC. – Bernama 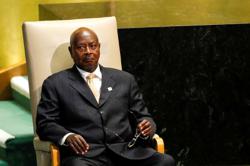