Hundreds of millions of people around the world are using a host of videoconferencing tools to stay connected. Having to continually wear the social mask before your own screen can cause anxiety, clinical psychologist says. — SCMP

Veteran primary schoolteacher Rita* could never have imagined a videoconferencing app she had never heard of would give her bad dreams, but that was before the coronavirus pandemic shut her school forcing her to work and learn from home.

Studying for a master’s in Chinese language, as well as teaching, means Rita, has had to use Zoom for about two hours every day since late January, when the city was first hit by Covid-19.

Adopted by hundreds of millions of people around the world, the app has enabled her to teach classes, conduct conferences with colleagues, attend lectures and submit course work, as well as learn Japanese for fun – almost all from her bed.

While appreciating how Zoom had helped her maintain some social interaction with people, she said: “If I had a choice I would definitely not have used it.”

Pui*, a charity group manager, said she had to use the app four days a week from her home office for between 90 minutes and 2½ hours a day.

The single mother of a teenage boy had enjoyed spending more time at home, but also felt drained by the videoconferencing, in which she often felt obliged to show her face even though it was not compulsory.

“Your face appears to be big on others’ screens so you need to pretend to be attentive ... and I intentionally moved the table so that there would be nothing in my background, because I don’t want others to see my home,” she said.

When she began using Zoom, she was nervous and thought she needed to go through all her material before a meeting to ensure she could quickly respond on a platform she was not familiar with yet, a situation other users faced too. And even at home, she needed to still spend time putting on make-up before sitting down in front of the camera. 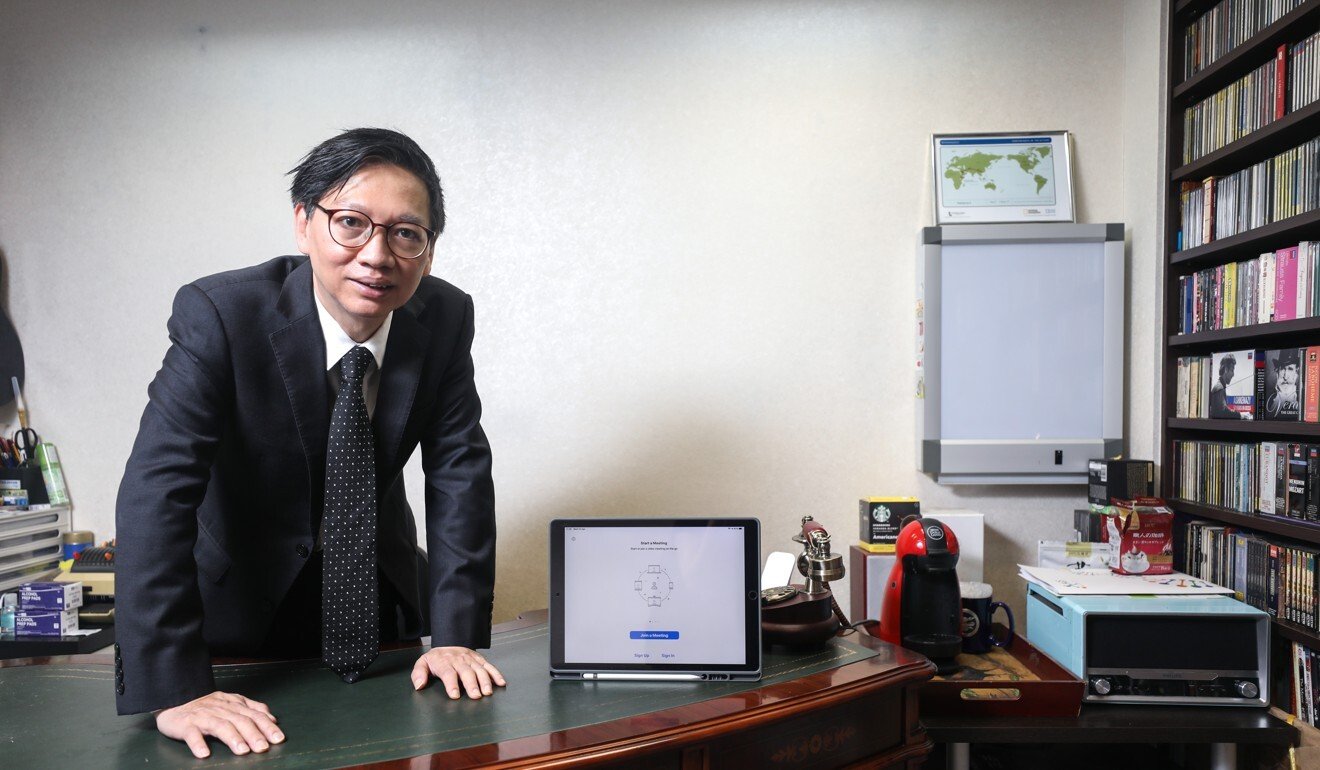 Psychiatrist Dr Ting Sik-chuen, vice-chairman of the Mental Health Foundation, said his daily routine was now full of videoconferencing, and his workday had grown longer.

He was less concerned by recent security and privacy concerns surrounding the app than “Zoom fatigue”.

The emerging term is used to describe tiredness resulting from overusing the app and similar other ones, such as Google Meet, Skype Meet Now or FaceTime.

For visually connecting with colleagues at home during lockdowns, Zoom has become a favourite choice, with nearly 600,000 people downloading the app on a single day last month. Ting noted people were spending more time in online meetings that went beyond their regular work hours. “People will get physical and mental exhaustion more easily, which would affect their concentration, work performance and quality of sleep,” he said. “During Zoom meetings, people have difficulties picking up non-verbal expressions, the tone of voice and the hidden emotions of the others, and handling this consumes extra energy.”

According to Ting, the mental stability of some long-term patients had worsened because of the stress of working from home and virtual meetings. Ting believes that could become more prevalent in the city as working from home increases the use of videoconferencing apps.

“I was not so busy before,” he said. “Now there are too many Zoom meetings with people willing to engage in more discussions. A meeting that was previously held once a month in person has become weekly on Zoom.”

He said some of his patients had also complained about the demands their bosses placed on them now. “Bosses will assume you’re standing by all day,” he said. “People can find no reasons to reject [a call for a Zoom meeting]. You can’t say you need to cook.”

Peter*, who taught in a government primary school, said a superior would call Zoom meetings at 9pm, and some of those were just not necessary before the pandemic.

“Some meetings were called, but it was a bit like just for the sake of calling it, it was like telling people we did something with Zoom,” he said.

This change in working has prompted mental health experts to call for a code of practice over video conferencing.

Ting said it was time firms and organisations were setting rules over the use of videoconferencing, with the aim of creating a clear work-life balance.

“One of the rules could be allowing short breaks, not to schedule the meetings back to back with no breaks, a time off of five minutes for water or bathroom or some fresh air or changing a place,” Chan said. To help alleviate tiredness and boost concentration, people could take notes with pencil and paper to help them keep track, he said.

Chan suggested homebound employees set up a private workspace, but not doing everything on the same table because that would worsen the feeling of fatigue.

Another clinical psychologist, Dr Joseph Siu Chu-shek, who recently started to promote awareness of cyber and Zoom fatigue, pointed out that people using a virtual meeting app might end up in a vicious cycle, where those in the meeting looked for higher efficiency, meaning the need for a higher demand in concentration, which could result in greater exhaustion and slower responses, possibly pushing people to go faster.

“That’s why they become tired so quickly. I was just sitting here for 30 minutes, but felt like I used more energy than during an in-person conversation,” Siu said.

Another challenge was users had to watch their own face while maintaining outward composure. “Having to continually wear the social mask before your own screen can cause anxiety,” he said. “And it’s also like stage fear when you talk on a stage.”

The stress is caused by the need to be better prepared for classes to make sure she does not fail to answer students’ questions when parents or her superiors have joined in. She is also frustrated when colleagues do not show their faces or do not eagerly respond to questions.

Rita has realised Zoom has blurred the boundaries between school, university and home.

“I really want things to return to normal soon, so I can return to school and my lectures,” she said. – South China Morning Post

*Names have been changed at the request of those involved

Zoom parties are so five weeks ago: hello virtual reality

Is your kids’ e-learning driving you up the wall? Don’t stress, parents, says one expert: ‘Let’s just keep it real’

Are children safe from ‘Zoombombing’ while using popular app for distance learning?

Beware of online scams using the names of videoconferencing apps

Zoom hack: What about the encryption models used by Microsoft, Google, and AnyDesk?