Rodriguez (left) training a drone pilot from the State University of Zanzibar how to fly a drone to spray the breeding grounds of malaria-carrying mosquitoes, at Cheju paddy farms in the southern Cheju region of the island of Zanzibar, Tanzania. Drones spraying a silicone-based liquid that spreads across the large expanses of stagnant water where malaria-carrying mosquitoes lay their eggs, are being tested to help fight the disease on the island of Zanzibar, off the coast of Tanzania. — Photos: AP

ZANZIBAR, Tanzania: For the first time drones are being tested to help fight malaria on the island of Zanzibar, off the coast of Tanzania.

The drones will spray a silicone-based liquid on rice paddies, where there are large expanses of stagnant water where malaria-carrying mosquitoes lay their eggs. The substance will spread across the water and prevent the eggs from hatching. It is hoped this will significantly reduce the numbers of the malaria-carrying anopheles mosquitoes in the area.

The spraying by drones is a test to see if it will help the government of Zanzibar reach its goal of eliminating malaria on the archipelago by 2023, according to the strategic plan adopted by Zanzibar Malaria Elimination Programme.

The drone spraying is a relatively inexpensive way to stop the mosquitoes from reproducing, said Bart Knols, a medical entomologist and lead researcher of the programme. 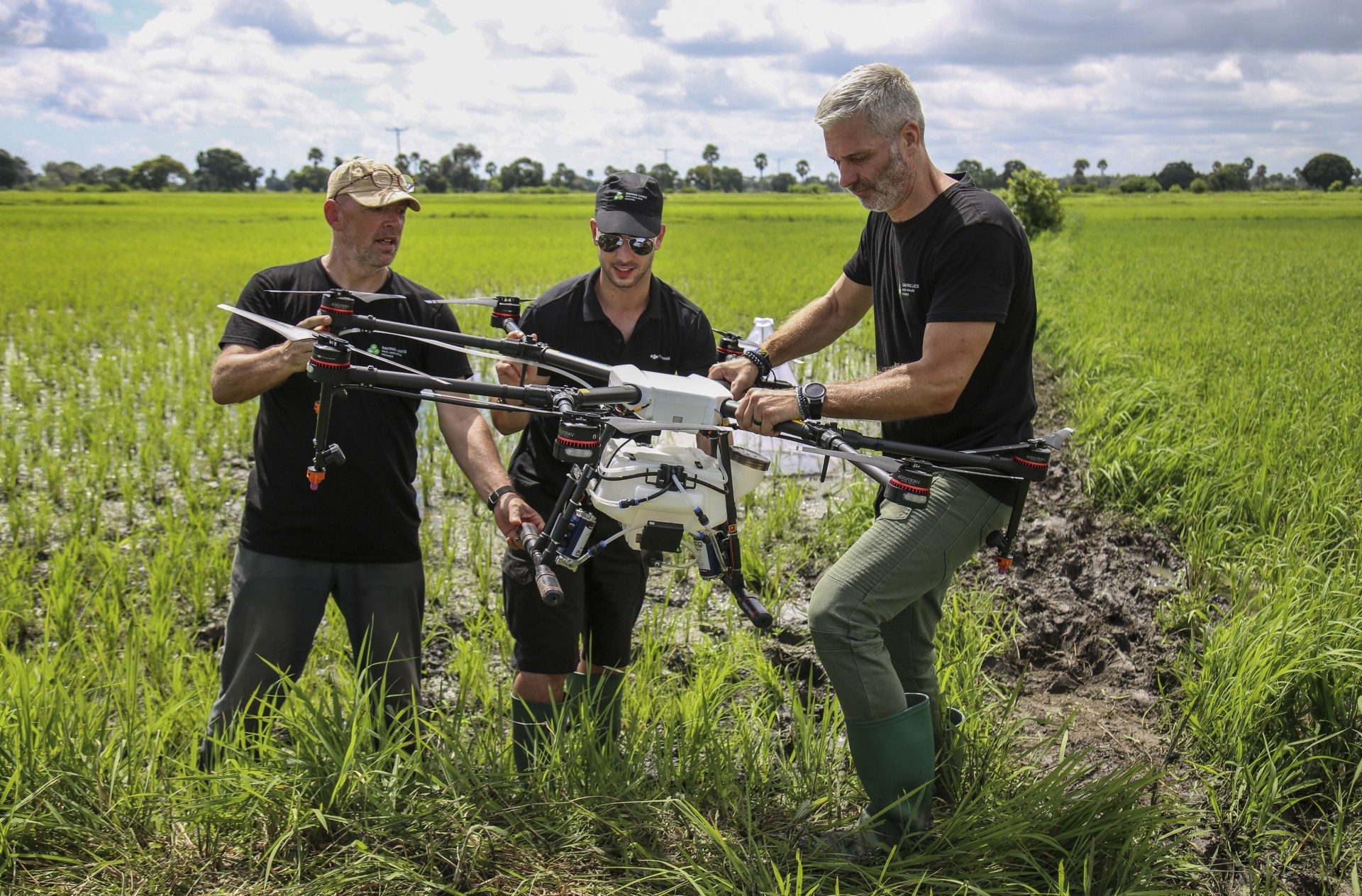 Knols (left), Rodriguez (centre) and Guido Welter, a consultant from the Anti-Malaria Drones programme, preparing a drone to spray the breeding grounds of malaria-carrying mosquitoes, at Cheju paddy farms.

"We are getting to the bottom of it as we will spray the breeding grounds of mosquitoes," said Knols, who is with the Dutch Malaria Foundation.

The drone will spray Aquatain, a liquid gel that will spread over a section of water and kill mosquitoes' larvae, said Knols. The substance has been tested internationally and has been found to be harmless to non-target organisms, non-toxic and biodegradable.

In the initial test, in the Cheju area of southern Zanzibar, the drone flew over and sprayed the shallow, sunlit water bodies in the rice paddies teeming with mosquito larvae, which were trapped as the gel spread across the water. Without the gel, the larvae would have emerged as adult mosquitoes in search of a blood meal. When those mosquitoes bite humans infected with malaria, they become vectors for the disease and continue its deadly transmission cycle. 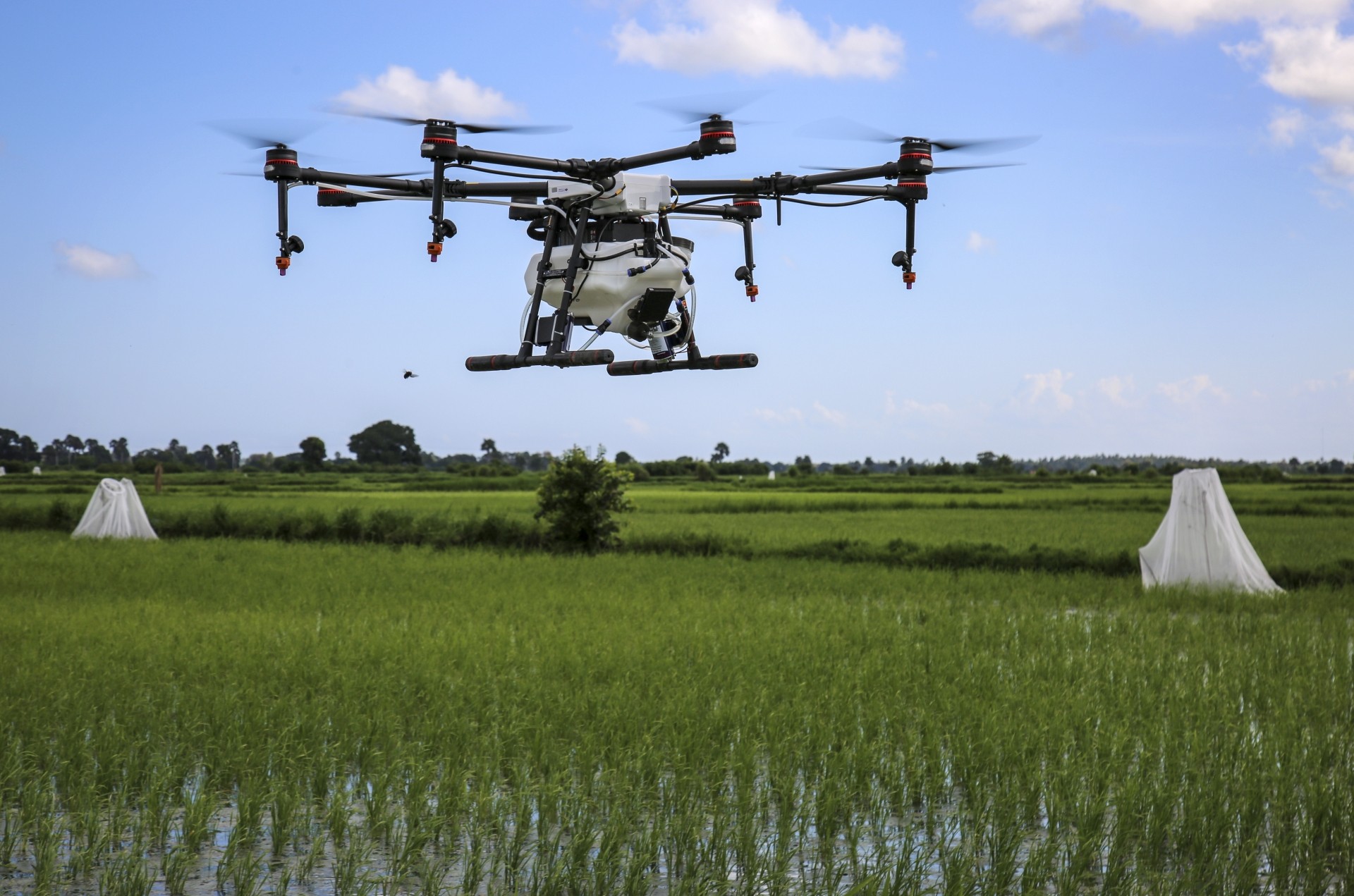 A drone spraying the breeding grounds of malaria-carrying mosquitoes is tested at Cheju paddy farms in the southern Cheju region of the island of Zanzibar, Tanzania.

Along the Indian Ocean coast of East Africa, Zanzibar and mainland Tanzania have had a long, well-documented battle with malaria.

In the last 10 years, Zanzibar, with a population of 1.2 million people, has embarked on different methods of fighting malaria. Thousands of mosquito nets have been distributed to put over beds and insecticide was supplied to spray in homes.

The campaigns have succeeded in decreasing the disease's prevalence. Some areas of Zanzibar have seen the prevalence of malaria drop from 40% of the population to less than 10%, according to the malaria elimination programme.

The spraying by drones is a new part of the strategy. The use of drones will be essential to efficiently spraying the large rice fields, which have been identified as malaria hot spots on Zanzibar. The drone is efficient because spraying by hand is very time consuming and using a helicopter is too expensive, said Eduardo Rodriguez of DJI, a Chinese drone manufacturer. 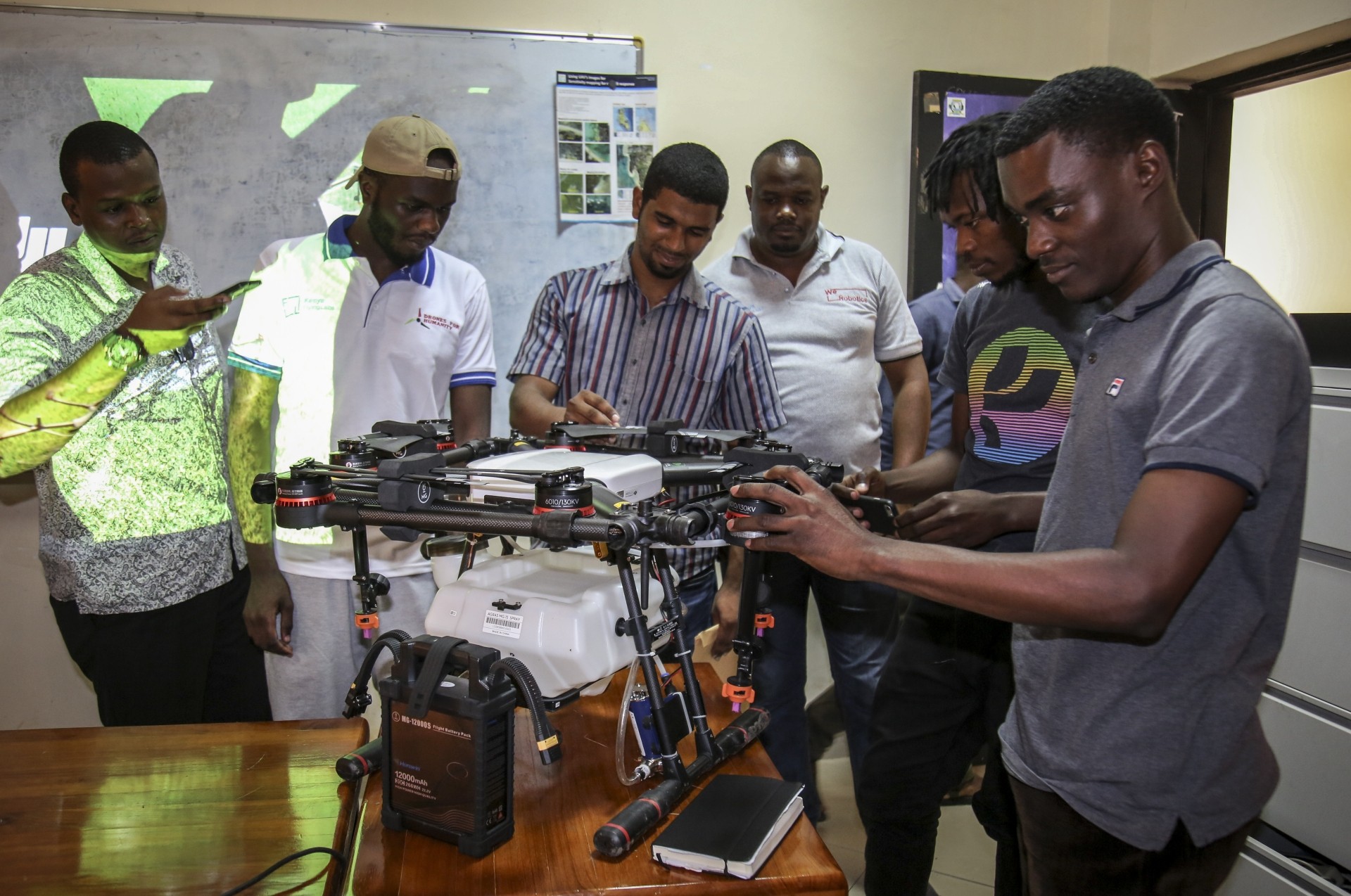 Trainee drone pilots from the State University of Zanzibar examine a drone to be used to spray the breeding grounds of malaria-carrying mosquitoes, at Cheju paddy farms in the southern Cheju region of the island of Zanzibar.

With the help of drone pilots from the State University of Zanzibar, the DJI Agras drone is being tested to spray the rice paddies.

"The ultimate vision of our fight against malaria is to bring malaria down to zero in year 2023 as our target," said Abdullah Suleiman Ali, manager of the Zanzibar Malaria Elimination Programme. – AP