Scientists have invented a new kind of thin material that can cool a surface against the heat of the sun without using energy or typical air conditioning, a study said.

"We feel that this low-cost manufacturing process will be transformative for real-world applications of this radiative cooling technology," said researcher Xiaobo Yin, an assistant professor at the University of Colorado, Boulder.

Uses for the product could include keeping buildings and other objects cool, as well as extending the life of solar panels.

In the case of thermoelectric power plants, which need massive amounts of water and electricity to maintain the operating temperatures of their machinery, such a film could save resources and money.

Researchers found the material could cool objects by dissipating the sun's thermal energy in the form of infrared radiation.

In field tests, the material showed a cooling power roughly equivalent to the electricity generated using solar cells for a similar area, and could cool continuously both day and night.

"Just 10 to 20 square meters (yards) of this material on the rooftop could nicely cool down a single-family house in summer," said co-author Gang Tan, an associate professor in the University of Wyoming's Department of Civil and Architectural Engineering.

While not on the market yet, researchers said the material is lightweight, easy to fit to curved surfaces, and fairly simple to mass produce. — AFP 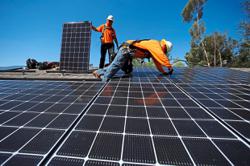