Back to you: Aifa Azman (left) returning a shot to Canada’s Danielle Letourneau during the Malaysian Open semi-final match at the National Squash Centre in Bukit Jalil. — IZZRAFIQ ALIAS/The Star

PETALING JAYA: There’s just no end to Malaysian teenage sensation Aifa Azman’s fairy-tale run as she sent the fans into a frenzy by storming into the women’s final at the Malaysian Open squash championships.

Aifa, playing on a wild card invite, kept up her giant-killing feat by stunning Canadian fifth seed Danielle Letourneau 11-4, 11-7, 5-11, 11-3 in the semi-final at the National Squash Centre in Bukit Jalil yesterday.

Backed by the vociferous home crowd, Aifa rose to the challenge by wrapping up the first two games in quick fashion.

Letourneau, ranked 19th in the world, fought back to win the third game but Aifa was relentless in charging to an 11-3 win in the fourth game in the 32-minute triumph.

She enthusiastically celebrated after sealing the winning point, obviously delighted about her achievement in entering the Malaysian Open final for the first time. And the icing on the cake was that it was her first victory over a world top-20 player.

“My strategy was to play more shots at the front as she was really good at covering herself. I can’t believe that I am in the final. At the start of the week, I told my mum that I wished she would be able to see me play over the weekend.

“It’s my biggest tournament success and I’m looking forward to the final tomorrow,” said the 19-year-old.

“I was not expecting to go far but after the draw was made, I thought I had a chance to do well.

Aifa will take on top seed Salma Hany of Egypt as she bids to become the fifth local to win the Malaysian Open women’s title after Low Wee Wern, Rachel Arnold, S. Sivasangari and Nicol David in the last decade.

“Nothing’s going to stop me now. I think the pressure is not on me as I am just a wild card,” added the world ranked 69th player who had earlier beaten three higher ranked Egyptians en route to the semis. 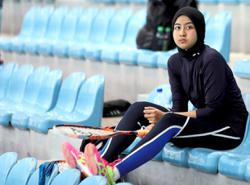