Nazreen Abdullah has quit the national team due to a nagging shoulder injury. -Filepic

PETALING JAYA: The men’s elite diving squad have lost one diver and may lose another.

Sixteen-year-old Nazreen Abdullah, who shone with two gold medals at the Myanmar SEA Games last year, has quit the national team due to a nagging shoulder injury.

And the squad may now lose Mohd Danial Sabri too. He is currently out for an indefinite period due to an ear ailment. He is the brother of Glasgow Commonwealth Games bronze medallist Nur Dhabitah Sabri.

Nazreen, of Kuala Lumpur, joined the elite squad early last year and made his presence felt when he beat experienced team-mate Ooi Tze Liang to win the 10m platform individual gold at the Myanmar SEA Games.

He also did well to claim two gold medals in the same events at the fifth Asian Diving Cup in Singapore last year and was named the National Sportsboy in the MSSM Sports Awards this year.

Nazreen was slated to compete in the qualifiers for the Youth Olympics in Nanjing in March but that was when his troubles began.

“He struggled with his (shoulder) condition after that. Nazreen has not trained for some time and left the squad recently,” said Amateur Swimming Union Malaysia assistant secretary Mae Chen.

“We do not have enough male divers in the team ... those present will have to juggle several events.”

Even that’s going to be quite a problem if Danial’s ear problem worsens.

“Danial has an ear problem and he has been given time to get it treated. He has been advised not to dive because it can get worse ... especially as he is a platform diver,” said Mae Chen. 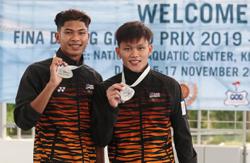 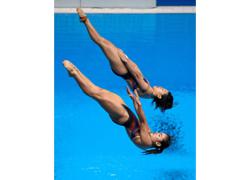