Winning smile: Azizulhasni Awang posing with his Olympics medal after coming in second in the keirin in Tokyo. — AP

PETALING JAYA: Even a hero needs a vacation every now and then.

And with that in mind, track cycling head coach John Beasley has given Tokyo Olympics silver medallist Azizulhasni Awang his blessing to skip the World Championships in Roubaix, France from Oct 20-24.

Azizul is the most decorated Malaysian cyclist when it comes to the world meet having won a total of seven medals.

His last two podium finishes were bronze medals won in keirin and sprint at the 2020 edition in Berlin, Germany.

It will be the first time in 10 years that Azizul will not be competing in the world meet since he skipped the 2001 edition to recover from a freak injury where his left calf was pierced by a wood splinter after crashing at a competition weeks earlier.

Beasley said Azizul had done more than enough for Malaysian cycling in Tokyo and deserved the chance to stay out of the limelight for once.

“Let him relax, smell the roses and enjoy his Olympics silver medal win. We can have him back ready for action next year,” said Beasley.

“Azizul has not seen his family (in Melbourne) for some time and his wife is expecting their third child.

“It’s also not possible for him to go back to Australia and then head out for the world championships because he is not going to be in a condition to perform with the time wasted on travelling,” said the Aussie.

Azizul qualified for the world meet by virtue of winning the sprint title at the 2020 Asian Cycling Championships in South Korea.

Malaysia will now be banking on Tokyo Olympian Mohd Shah Firdaus Sahrom and Mohd Fadhil Zonis to deliver the goods in the world meet.

Fadhil will join Shah Firdaus to compete not just in sprint and keirin but also in the 1km time trial.

Fadhil is the Asian record holder in the 1km time trial and won gold at the Track Cycling Nations Cup in Hong Kong in May.

Shah Firdaus warmed the hearts of many with his gutsy ride to reach the keirin quarter-finals despite a nasty crash in the first round in his Olympics debut.

“I have high hopes on the two but it’s also going to be a good learning process for them on how to have more self-confidence,” added Beasley, who has not returned to Melbourne since June.

Azizul goes Down Under to become a babysitter 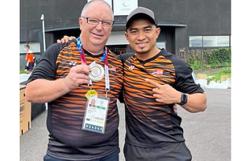