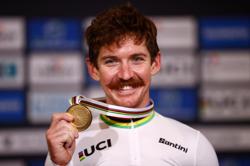 The 25-year-old, who sustained injuries after crashing during the men’s keirin race in the Tokyo Olympics, said he has fully recovered.

“I have spoken to my coach, John Beasley and family about it. Through their encouragement, I decided to take part in the Track Cycling World Championships to finish off 2021.

“Now, we are in the midst of preparing and training in Nilai for the world championship before flying off to France on Oct 10,” he added.

The Muar-born athlete said that the championship, which will be held in Roubaix from Oct 20-24, would be his “final competition” before closing his race calendar in 2021 following the cancellation of the Asian championship in Kazakhstan due to Covid-19.

Shah Firdaus added that he would be making his third appearance in the world championship where he will be joined by teammate Muhd Fadhil Mohd Zonis.

The state government handed out RM55,000 in cash incentives to Johor-born athletes who took part in the Olympics and Paralympics in Tokyo.

Among those who received the incentives include Paralympians Chew Wei Lun, who was rewarded with the highest amount of RM15,000 for his silver medal in boccia, and track athlete Siti Noor Iasah Mohamad Ariffin, who collected RM5,000.