Special bowlers get into the game

Plenty of support was given to the special athletes throughout the tournament.

THERE was nothing but confidence on the faces of participants at the fourth edition of the Special Olympics Selangor (SOS) Unified Bowling Tournament in IOI City Mall, Putrajaya.

The tournament was organised in conjunction with the Eunice Kennedy Shriver Day – the founder of the Special Olympics movement.

Five out of nine districts in Selangor participated in the tournament, including several community-based rehabilitation centres (PPDK).

There were 34 teams, each consisting of four members – three intellectually-disabled athletes and a normal partner.

Before the tournament began, the participants took the Special Olympics oath: “Let me win. But if I cannot win, let me be brave in the attempt.” A special bowler being encouraged by a team member to give it his best shot.

The atmosphere at the bowling alley was lively throughout the day, filled with loud cheers of encouragement from parents and caretakers.

All the participants received medals for participation and completing the tournament, as a form of encouragement.

Joining the event for the first time as a unified partner to the special children was Muhammad Azman Mois, 60.

He said the experience made him feel proud and grateful to be on the same team as the Special Olympics athletes. Yeoh (in grey outfil) with the bowlers, committee members, volunteers and parents during the closing ceremony of the Special Olympics Selangor (SOS) Unified Bowling Tournament at IOI City Mall in Putrajaya.

Azman, who had only accompanied his wife, PPDK Kuala Langat officer Sulaiha Sahit, to the tournament, later decided to fill in for a player who could not make it.

He said he would be happy to participate again in the future.

“I have been working with the PPDK for a year and it has taught me to have patience when educating the special needs children as they often get bored quickly and lose focus,” Sulaiha said.

She commended the parents and caretakers who were present to providing support to the children. 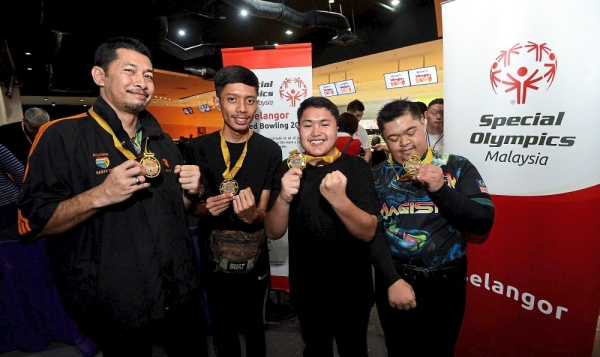 SOS president Patricia Wong said the tournament was seen as an opportunity to help the intellectually disabled individuals adapt to society in a social setting.

“The children need to be exposed to the outside world. This way, they will be more prepared when they have to enter the workforce in the future.

“By allowing them to socialise and communicate with ordinary people, they will have a chance to practise their abilities.

“We also create scenarios during their regular training sessions where they are required to handle the registration process before they can bowl,” she said, adding that this was to encourage the special athletes to interact with others and learn the value of money. A special bowler celebrating with his partner after successfully dropping some pins.

Through sports, she said, they could also instil discipline in the children.

“You do not have to tell them many times for them to understand; just tell them once and they will follow it right away,” she said.

Deputy Women, Family and Community Development Minister Hannah Yeoh, who attended the closing ceremony, said she was delighted to learn that the Selangor Bar Council had also participated in the event.

“This is a very good and inclusive programme as it spreads awareness so others outside the Special OIympics community can know about what these people do,” she said in her closing speech.