"Peng Soon and Yee See have both decided to quit BAM. They feel that the time is right for them to move on. Peng Soon shared that he had his own plans after this. He did not reveal what those plans are," said Kenny.

Peng Soon's former partner Goh Liu Ying had also announced her retirement after the Malaysian Open in January next year.

The veteran pair had formed a successful partnership before this and had captured silver in the 2016 Rio Olympics.

Peng Soon had failed to reach the same heights with Yee See. 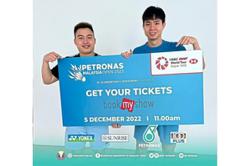 Easier for Aaron-Soh to reach first semis, tougher for Pearly-Thinaah in Finals
Zii Jia spars at BAM as he seeks to rejuvenate next season
Qualifying rules for Tour Finals may need an overhaul
Taking it nice and slow – Tze Yong on right track to qualify for Olympics
Surprise! Zii Jia first pro to attend BAM joint training
Aaron-Soh must overcome final hurdle to make 2022 special
Tickets for Malaysian Open on sale
Rashid: China’s Yuqi a major threat now
Thana: Give everyone a shot at Olympics
Reward pours in to keep Thinaah-Pearly thirsty for more