PETALING JAYA: Independent singles shuttler Goh Jin Wei will be out to make some noise at the Malaysian Masters after being promoted to the qualifying round due to several withdrawals.

Jin Wei will play India’s Malvika Banson of India in the first round today at the Axiata Arena and may meet Indonesia’s Ruselli Hartawan in the second.

If she comes through the qualifier, she will get to play Zhang Yiman of China in the first round of the main draw tomorrow.

The 23-year-old is in the same quarter with P.V. Sindhu of India, He Bingjiao of China and second seed Tai Tzu-ying of Taiwan.

In the top half, top seed Akane Yamaguchi of Japan will be out to make amends after losing in the first round of the Malaysian Open last week.

Hopes are on Jin Wei to bring some home cheers. After all, she did play well by winning all the matches against higher-ranked players in the Uber Cup Finals group stage in Bangkok in May.

In the men’s singles, Malaysia will have six representatives in the qualifiers.

Only Liew Daren is in the main draw following the withdrawal of Lee Zii Jia.

Daren will cross paths with eighth seed Angus Ng Ka Long in the first round tomorrow. 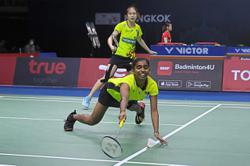