Vast difference: Mohd Haiqal Hanafi’s record of 10.35 in the Philippines SEA Games record is a far cry from China’s Su Bingtian’s (right) 9.92 recorded at the 2018 Asiad.

WHEN Indonesia’s Suryo Agung Wibowo won the 2009 SEA Games 100m race, he was imperious. His timing was better even than the winner of the blue riband event at the Asian Games the following year. China’s Lao Yi could only manage 10.24.

But that was as good as it got for the South-East Asians.

Since then, the achievements at the SEA Games have got poorer while those at Asian level started soaring to the top of the world.

Nigerian-born Femi Ogunode, who represented Qatar, broke the Asiad record by clocking 9.93 to dip below 10 seconds in 2014 in Incheon, South Korea.

In the last Asian Games in Jakarta in 2018, China’s Su Bingtian bettered that mark by posting 9.92. The world record stands at 9.58, set by Usain Bolt in 2009, when Suryo ran his great race.

Closer to home, the SEA Games has been stagnating, if not regressing.

Since Suryo’s 2009 run, no sprinter has come close to the Games record. The time clocked by sprinters in the SEA Games final is way off the Asian record of 9.91 set by Su Bingtian of China in Atletismo Meeting in Madrid, Spain in 2018. In fact, only one of the SEA Games winners since Suryo could better the then national record of 10.30s set by Watson Nyambek in 1998. Filipino Eric Shawn Cray managed 10.25s in the 2015 Games but all the rest were slower than 10.30s.

What is more embarrassing is that the Sukma (Malaysia Games) 100m record is 10.18s, set by Khairul Hafiz Jantan in 2016.

Sukma is a meet for Malaysian youths. The SEA Games is supposedly for the cream of South East-Asia.

Outside of South-East Asia, though, sprinters are making great strides.

Bingtian remains the top Asian sprinter and has been clocking consistently well in competitions.

A few other Asian sprinters have run below 10s and it shows that they have the ability to challenge the world’s best in the World Championships and also in the Olympics.

Bingtian was also the first Asian sprinter to qualify for the blue riband final in the World Championships in London where he clocked 10.27 to finish eighth.

Another world class sprinter from Asia is Japan’s Yuki Koike, who clocked 9.98 to finish second in the London Diamond League last year.National chief coach Mohd Manshahar Abdul Jalil admitted that there is vast difference between sprinters in China and Japan compared to athletes in the South-East Asia region.

“Sprinters from China and Japan have shown tremendous progress in competitions in the last few years. They have talented sprinters, who have the desire to go beyond the limits to achieve their goals, ” said Manshahar. 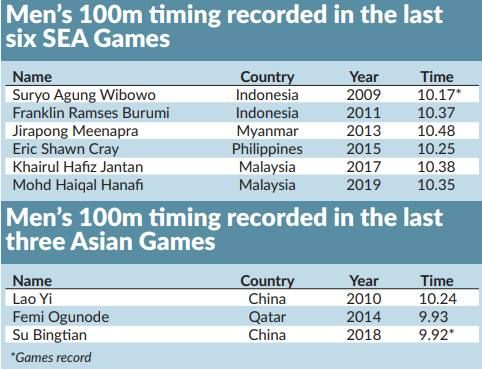 “These world class sprinters either train in the United States or hire American coaches to help them dip below 10s in competitions.

“Chinese and Japanese sprinters receive very good support from their government, National Sports Institutes and coaches. They also compete in many major competitions to make sure they maintain a good time in meets, ” said Manshahar.

Manshahar said the sprinters in this region have yet to make a mark beyond the SEA Games.

“The timing clocked by sprinters in the Games is not impressive and it is not even near the Olympics qualifying mark of 10.05.

“It will take some time before the sprinters in our region will be to challenge top athletes in Asia. I have faith in Mohd Haiqal Hanafi, who won the gold in the Philippines SEA Games last December.” Haiqal clocked 10.35s to win.

“He is only 21 and I am confident he will be able to clock a flat 10s in the next five years. He must avoid getting injured and keep believing in himself, ” said Manshahar.

Manshahar also believes that 15-year-old Mohd Azeem Mohd Fahmi of Perak, who has a personal best of 10.61 could hit the 10s mark in the next five years.

“He is a born athlete and expectations are high on him to achieve greatness with the help of American coach Dwayne Miller, who is the Malaysian Athletics Federation (MAF) technical director, ” said Manshahar.