MALAYSIA is opening up more and more, not only to reignite its economy but also because we need to learn how to live with Covid-19 as it moves towards becoming endemic.

It’s been great to see people going back out to support local businesses like malls, restaurants and the hard-hit tourism industry. But even as the government tried to gradually lift the lid by allowing certain activities to restart in stages, some over-eager Malaysians decided to throng malls, waterfalls and beaches in droves.

It’s only natural to seek sun and fresh air as well as some retail therapy after being cooped up at home for more than a year and a half, so we can’t really blame them.

The problem is, people seemed to throw SOPs out the window – especially the physical distancing rule – as they gathered, perhaps because they don’t know of or are confused by the National Security Council (NSC) guidelines released on Sept 9.

For instance, while the guidelines state that picnicking is allowed for fully vaccinated individuals, they do not include activities in forest reserves where the waterfalls are.

Last weekend, many waterfalls in Selangor and other states and areas in Phase Two of the National Recovery Plan – Kelantan, Melaka, Pahang, Penang, Perak and Sabah, and the territories of Kuala Lumpur and Putrajaya – were packed with picnickers.

A golf club in Selangor was fined RM36,000 and some golfers who were not fully vaccinated were booked after they played on the course.

On Tuesday, Datuk Seri Hishammuddin Hussein, the senior minister leading the pandemic management effort under the NSC, announced that the government is streamlining existing SOPs from 181 down to 10.

This is so that business operators, enforcement agencies and ordinary people will understand them better and enforce and follow them easily.

Apart from being well-thought out, rules affecting the public must also be considered in terms of their effects and repercussions before they are announced – let’s not have any confusing back-peddling.

While the government does its part to ensure SOPs are well defined and understood by everyone, business operators must also safeguard the nation’s health by making sure their patrons follow the rules.

They also need to work with the government to address crowd control to prevent people from breaching the physical distancing protocol.

We all must learn to make adhering to the SOPs automatic as we inch towards completely opening up and living with the virus.

The consequence of not following these rules isn’t just a fine we can plead down, but a return of uncontrolled number of cases once again threatening our healthcare system and requiring a lockdown. And we simply cannot afford that. 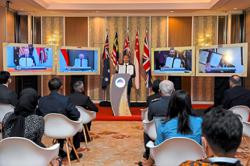