QuickCheck: Is a tsunami as fast as a jet plane?

WHEN we think of jet planes, we think speed. A tsunami, on the other hand, is a series of extremely long waves.

So, can tsunamis travel at jet-plane speed?

The speed of a tsunami depends on the depth of the ocean. However, a tsunami can travel at well over 970km/h, which is as fast as a jet plane.

It takes a tsunami just a few hours to travel across an entire ocean.

Unlike wind-driven waves which only travel through the topmost layer of the ocean, tsunamis move through the entire water column, from the ocean floor to the ocean surface.

A tsunami may be less than a foot in height on the surface of the open ocean, which is why they can travel unnoticed. But the powerful shock wave of energy travels rapidly through the ocean as fast as a commercial jet.

Once a tsunami reaches shallow water near the coast it is slowed down. The top of the wave moves faster than the bottom, causing the sea to rise abruptly.

Scientists are able to calculate arrival times of tsunamis in different parts of the world based on their knowledge of when the event that generated them occurred, water depths, and distances.

Tsunamis do not necessarily crash on land as a series of giant breaking waves. They may be more like a very rapidly rising tide.

This may be accompanied by much underwater turbulence, sucking people under and tossing heavy objects around.

Let’s not forget how entire beaches have been stripped away by these waves. They are really not to be taken lightly. 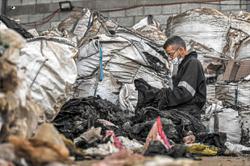