Imports of consumer goods flow as normal in Laos

Many Lao people, in particular those living in the countryside, have expressed no fears of food shortages if the international supply chain is interrupted, with many already having reserves of grain and livestock, - AFP

VIENTIANE (Xinhua): The Department of Import and Export in Laos confirmed that imports of consumer goods from Thailand through border checkpoints continue to flow as normal.

Vehicles transporting goods with customs permits are still permitted to cross at the international border checkpoints despite their temporary closure to travellers to prevent the spread of Covid-19.

Nevertheless, many households around the country, especially Lao capital Vientiane, have been stocking up on items such as dried foods following concerns about imported goods coming in. Consequently, wholesalers and retailers in Vientiane capital are currently reporting shortages of these products.

Freight between Laos and Thailand was still moving freely as authorities of both countries have close cooperation on this issue to promote bilateral trade, local daily Vientiane Times on Thursday quoted Export and Import Department Director-General Soulinhon Philavong as saying recently.

However, Lao consumers may struggle to acquire certain imported products from Thailand as many factories have reduced or stopped production amid the Covid-19 outbreak.

The vast majority of consumer goods available in Laos are imported, mainly from Thailand as well as China and Vietnam.

In response to Covid-19, the government has urged the Lao people to prepare for an unpredictable scenario as the number of coronavirus cases continues to grow.

Imports in January reached US$480 million and dropped to US$378 million in February, according to Lao Ministry of Industry and Commerce.

Many Lao people, in particular those living in the countryside, have expressed no fears of food shortages if the international supply chain is interrupted, with many already having reserves of grain and livestock, according to the report. - Xinhua 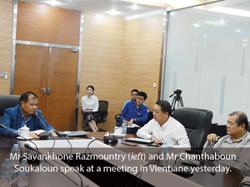 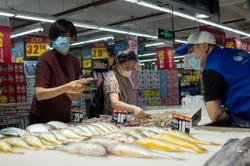