Surveying the premises: Screen grab of a video showing Fawwaz touring the beer promotion at a mall in Seberang Jaya. — Courtesy of TikTok

BUTTERWORTH: A PAS lawmaker has been taken to task for ticking off a mall over its Chinese New Year beer promotion at its premises in Seberang Jaya here.

The move by Permatang Pauh MP Muhammad Fawwaz Muhammad Jan has not gone down well with many quarters, with Pengkalan Kota assemblyman Daniel Gooi describing him as overstepping his jurisdiction by “assuming the role of moral police”.

“It is clear that the promotion is held in conjunction with the upcoming Chinese New Year celebration.

“It caters to non-Muslims, and the activities are carried out in accordance with the law,” Gooi said in a statement.

On Monday, Fawwaz, who is also Penang PAS Youth chief, marched into Sunway Carnival Mall to demand the promoter conceal the sale of beer at the central atrium out of respect for the sensitivity of Muslims in the area.

Accompanied by a few party members, he met with the mall management, saying there had been complaints from Muslims.

A 52-second video, which he posted on his TikTok account, of his visit to the mall has since gone viral and caused a stir on social media.

“It is not the role of an MP to lecture on or interfere in such matters, no matter how good their intentions may be.

“It is the prerogative of non-Muslims to consume liquor,” said Ooi.

In defending his move, Fawwaz told The Star that the visit was done following complaints that the mall had been selling beer openly.

“We are not restricting the sale of beer, as we understand it is the right of non-Muslims to consume it.

“We are only requesting that the management take initiatives to not sell it openly, and we have found solutions.

“The promotion will still go on at the same location,” said Fawwaz, who thanked the management for the harmonious engagement during the visit.

It is unclear if it was the mall management that invited Fawwaz or whether he took it upon himself to bring the matter up.

Meanwhile, the mall spokesperson said the ongoing promotion would continue till the end of this month as scheduled, with minor adjustments to the three-week promotion following requests by Fawwaz to “cover up” the sale of beer.

“We have closed down a small activity corner where bar counters were set up for people to try their hands at mixing cocktails.

“All beer on sale has been covered up, and customers who wish to purchase it may seek assistance from mall staff to do so.

“Not a single can of beer can be seen at the venue anymore,” he said yesterday. 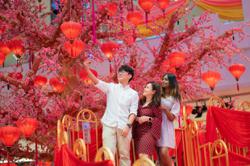