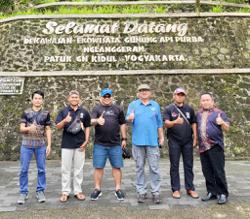 Bangkuai hosted a dinner for the India Market Tour Agents of the Malaysian Association of Tour and Travel Agents (MATTA) in Kota Kinabalu on Wednesday (Dec 7).

KOTA KINABALU: Sabah wants to diversify its tourist market in order to address the over-reliance on guests from China.

As such, the state will intensify efforts to lure Indian tourists as they represented the fastest-growing outbound market.

State Assistant Tourism, Culture and Environment Minister Datuk Joniston Bangkuai said the state's tourism industry was too reliant on the China market before the pandemic, stressing that it must now diversify its customer base.

“Sabah is recognised for its nature-based tourism but we also offer upscale products and one-of-a-kind travel experiences that would be of appeal to visitors from India,” he said, in a statement here on Thursday (Dec 8).

“They are big spenders, so we want to draw them in. In fact, over 6,000 Indian visitors came to Sabah pre-pandemic in 2019, showing a clear interest in visiting the region.

“While the number is modest, it is still quite promising,” he added.

Bangkuai, who is also Sabah Tourism Board (STB) chairman, assured that the STB was actively pursuing the Indian market.

Towards this end, he hoped to see a steady growth in arrivals next year.

“I am sure direct linkages between India and Sabah will be established in the future once there is a rise in the number of Indian visitors,” he added.

On Wednesday (Dec 7), Bangkuai hosted a dinner for the India Market Tour Agents of the Malaysian Association of Tour and Travel Agents (MATTA).

Also in attendance at the dinner were MATTA president Datuk Tan Kok Liang and representatives from AirAsia, Malaysia Airlines (MAS) and Batik Air.

He added that 3,247 tourists from India visited the state between January and October this year.

On Tuesday (Dec 6), India’s High Commissioner to Malaysia B. Nagabhushana Reddy paid a courtesy call to Bangkuai during which they exchanged views on potential cooperation and tourism development, among others.

In the meeting, Reddy mentioned the need to work with popular destinations because Indians traveled widely and in great numbers throughout the world.

He said that about 700,000 Indian tourists visited Malaysia in 2019, and the fact that a portion of them flew to Sabah demonstrated that Indian tourists were already making plans to experience the country's unique destinations.