The final tally as at 9.21pm showed Mohd Johari as having secured victory with 8,080 votes.

He had a majority of 573 votes over Perikatan Nasional's Nor Idayu Hashim who received 7,507 votes.

Even though Mohd Fadzli withdrew from campaigning to support Mohd Johari, he still garnered 784 votes as his name remained on the ballot papers.

This was the first successful partnership between Barisan and Pakatan in an election campaign.

This was after the two blocs joined forces to form the Pahang government.

Pahang Mentri Besar Datuk Seri Wan Rosdy Wan Ismail said this was proof that the people had started to accept the Barisan-Pakatan partnership.

"Surely the people can accept this. If not, how could we have won.

"I have explained several times that the government needed to be formed to enable us to carry out our duties for the people," he said.

Wan Rosdy also thanked Barisan and Pakatan component parties for helping out in the campaign.

Mohd Johari said his victory in collaboration with Pakatan showed that the people wanted a government that could bring about a stable political and economic environment.

He also thanked Wan Rosdy for forging the cooperation for the sake of racial unity in Pahang.

Barisan now had 17 seats in the state assembly, equal to Perikatan's holdings.

The Tioman election was postponed due to the death of Perikatan candidate Md Yunus Ramli, hours before polling began on Nov 19. 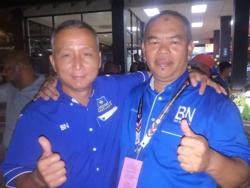