By ALEX TENG and IMRAN HILMY

Ready to go: EC workers checking polling paraphernalia in Rompin before they are distributed to polling centres in Tioman. — Bernama

ALOR SETAR: Although the 15th General Election (GE15) is done and dusted, it’s D-Day in Padang Serai near here and Tioman in Pahang.

Four candidates are fighting it out in both the Padang Serai parliamentary seat and the Tioman state seat.

The two polls were postponed from Nov 19 following the death of Padang Serai incumbent M. Karupaiya of Pakatan Harapan (Pakatan) three days before voting and Perikatan Nasional candidate Md Yunus Ramli on the eve of GE15.

This time around, Datuk Azman Nasrudin (Perikatan), Dr Mohamad Sofee Razak (Pakatan), Hamzah Abd Rahman (Pejuang) and Independent candidate Sreanandha Rao are in the running for the Kedah seat, although the actual fight will be between Perikatan and Pakatan, with the withdrawal of Barisan Nasional’s Datuk Sivarraajh Chandran.

The Tioman state seat will also be a fight between Perikatan’s Nor Idayu Hashim and Barisan’s Datuk Seri Mohd Johari Hussain although Osman Bakar (Pejuang) and Independent Sulaiman Bakar are also in the fray.

Will there be another “green wave” hitting Kedah and Pahang again like Nov 19 or, will Pakatan’s successful takeover of Putrajaya shine through today?

Businessman Hamidan Ahmad, 50, said looking at the current political climate, he intended to vote for Perikatan in Padang Serai.

“I have made up my mind. After all, what have we seen since the formation of the new Federal Government?” he asked.

Another voter who wanted to be known as Raju said he was unsure who to vote for.

“I have been a Barisan supporter all my life. Now, I have to choose between Pakatan or Perikatan. I am a bit confused,” he lamented.

Last week, Sivarraajh pulled out in support of Mohamad Sofee following the formation of the unity government at the federal level.

The result of the Padang Serai election will be testimony of how popular the new unity government led by Prime Minister Datuk Seri Anwar Ibrahim is.

During GE15, Perikatan won 13 parliamentary seats in Kedah, with Pakatan taking just one.

Meanwhile, the Election Commission (EC) has advised voters in Padang Serai and Tioman to come during the gazetted time or time stated in their voter’s information slip.

In a statement, EC secretary Datuk Ikmalrudin Ishak said 132,955 voters are expected to cast their votes in Padang Serai and 28,108 others in Tioman. He said the polling centres would open from 8am to 6pm.

The EC also encouraged the voters to wear face masks, use hand sanitiser and practise physical distancing at the polling centres, while those tested positive for Covid-19 should liaise with the district health officers at the centre for further instructions.

Ikmalrudin also reminded all employers to give time off to their employees to vote as provided for under the Election Offences Act 1954.

“The EC also hopes that all quarters will adhere to the rules, regulations and election code of ethics to ensure the smooth running of the election process and also to maintain public order,” he said, adding that legal action can be taken against offenders.

The Meteorological Department has predicted sunny weather in the morning in Padang Serai with thunderstorms in the afternoon.

In Tioman, rain is expected in the morning with good weather in the afternoon. 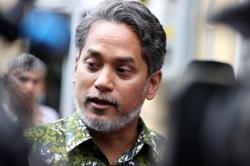