PETALING JAYA: It was a historical swearing-in ceremony as ministers in the unity government decreed by the Yang di-Pertuan Agong took their oath of office.

They stood side by side as they declared their oath of office, loyalty and secrecy in front of Yang di-Pertuan Agong Al-Sultan Abdullah Ri’ayatuddin Al-Mustafa Billah Shah at Istana Negara yesterday.

The ceremony held at the Balairung Seri Istana Negara (throne room) began at around 3pm with the singing of the national anthem.

The King, who wore a cerulean blue baju Melayu, and Raja Permaisuri Agong Tunku Hajah Azizah Aminah Maimunah Iskandariah, who looked resplendent in a royal blue baju kurung, walked into the room holding hands before taking their seats and witnessing the ceremony.

The next group comprised Anthony Loke, who will return to the Transport Ministry where he was in charge when Pakatan was in power between 2018 and 2020; Mohamad Sabu, the former defence minister under Pakatan who will now be in charge of the Agriculture and Food Security portfolio; Rafizi Ramli (Economy); Nga Kor Ming (Local Government Development); and Datuk Seri Mohamad Hasan (Defence). New administration: The King and Queen taking a photo with the new Cabinet ministers after the swearing-in ceremony at Istana Negara, Kuala Lumpur. — Bernama Anwar announced the members of the Cabinet on Friday. United we stand: (From right) Zambry, Tiong, Fahmi, Fadhlina and Aaron at their swearing-in at Istana Negara. — Bernama

The deputies will be named at a later date, he said.

Saifuddin, Tengku Zafrul, Zambry and Mohd Na’im were sworn in as senators yesterday morning before they took their oath as ministers.

Anwar, who will also serve as Finance Minister, was sworn in as Prime Minister on Nov 24.

Govt wants to empower the disabled 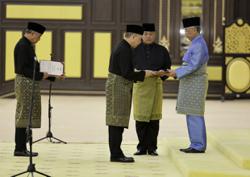