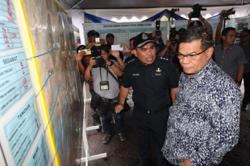 PETALING JAYA: The four newly-appointed senators say they are ready to shoulder the heavy responsibility that come with their jobs in the Cabinet.

Saifuddin said they have had a good relationship for decades and he had learnt a lot from the former home minister when he was appointed domestic trade and consumer affairs minister in 2018.

“I also learnt a lot from him in terms of understanding the ministry’s essential tasks and the challenges,” he told reporters after being sworn in as a senator in Parliament House yesterday.

Although their leadership styles are different, Saifuddin said, the principles of the administration were the same.

“Of course, I have my priorities, but I will contact Hamzah soon to get some tips to understand the role and function of the ministry,” he added.

Saifuddin said he was grateful for the appointment and that despite it being a heavy duty, he was determined to fulfil the trust to the best of his ability.

“The Home Ministry is a supportive and complex ministry with many challenges and problems, but I’m optimistic that with teamwork, it can be managed,” he added.

“I will carry out my duties as a senator with full trust and integrity, and ensure that the voice of the people continue to be raised in the Dewan Rakyat to ensure the well-being and prosperity of all races, religions and nations,” he said in a statement.

Meanwhile, Datuk Seri Dr Zambry Abdul Kadir said he hopes his experience in dealing with foreign officials during his tenure as Perak mentri besar will be of use in his new portfolio as Foreign Minister.

He, however, admitted that there was still much for him to learn and is hoping to get the ministry’s experienced officials to show him the ropes.

“I do have some experience in foreign relations, but this time (as Foreign Minister) it will be at a different level and a different ballgame. I may be new to the job, but I can assure you that I will not take this responsibility lightly,” he said.

Zambry, who is also Barisan Nasional secretary-general, served as Perak mentri besar from 2009 to 2018.

Datuk Dr Mohd Na’im Mokhtar, who is the only technocrat appointed as senator, said he had felt overwhelmed at first but after reality sunk in, he viewed it as a huge trust given to him to shoulder the enormous responsibility as Minister in the Prime Minister’s Department in charge of Religious Affairs.

“As a true Muslim, I realise how important it is for me to give my best in everything that is entrusted to me with full integrity and dedication.

“So with the same spirit and enthusiasm, I am now looking forward to my new portfolio,” he said when contacted.

Mohd Na’im has been presiding as the Chief Syariah Court Judge as well as Syariah and Judiciary Department director-general since April 1, 2019.

Prior to his elevation to the post of Chief Judge, he had served as Syariah Court of Appeal Judge, the Chief Syarie Judge of Selangor, Family Support Division director at the Islamic Judiciary Department and a Selangor Syariah High Court Judge.