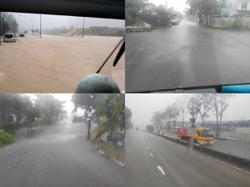 Selangor Fire and Rescue Department director Norazam Khamis said earlier that there was a burst bund incident following heavy rain in Kampung Ampar Tenang which caused water to overflow from a nearby housing project.

He said the incident caused flood water to rise about 1m and affected 10 houses.

"All residents comprising 18 families have moved to a safe place and the fire department is monitoring and assisting residents at the location," he said in a statement.

Bernama had earlier reported that continuous rain since 2pm Tuesday caused several areas in Sepang near here and Putrajaya to be hit by flash floods. - Bernama