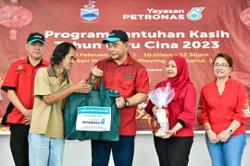 KOTA BARU: The Kelantan State Legislative Assembly was told Tuesday (Nov 29) that the Social Welfare Department (JKM) had channelled a total of RM164,337,952 to 47,045 recipients in the state as at September.

She said a total of 39,538 people were the recipients of aid provided through a federal government allocation while 7,507 individuals received aid from the state government.

"Under the federal government allocation, a total of 39,538 people received their respective aid involving an allocation of RM147,667,452.

Mumtaz said this in response to a question from Rozi Muhamad (PAS-Tendong), who wanted to know the number of Kelantan JKM aid recipients, during a question-and-answer session at the Kelantan State Assembly sitting here.

Mumtaz said the Kelantan government had also channelled the general assistance to 7,507 recipients involving an allocation of a total of RM16,670,500. - Bernama