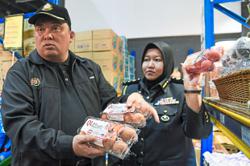 PUTRAJAYA: The Domestic Trade and Consumer Affairs Ministry has issued compound notices worth a total of RM534,200 against 2,205 producers, wholesalers and retailers of chicken and eggs for various offences from Feb 5 until Monday (Nov 28).

Its secretary-general Datuk Azman Mohd Yusof said the compound notices were issued through enforcement actions to prevent profiteering of subsidised and controlled items.

He said of the total, 153 actions involved offences such as selling goods above the maximum price, failing to display pink price tags on controlled items (1,980) and not displaying price tags (72).

"The actions and compounds were issued against 13 producers, 54 wholesalers and 2,138 retailers of chicken and chicken eggs.

"The value of items confiscated was RM336,634,” he told a press conference after officiating the Sihat Ke Saya? (Am I Healthy?) programme organised by the Association of Wives and Women Civil Servants (Puspanita) ministry branch here on Tuesday (Nov 29).

ALSO READ: Tracking the real cause of the chicken and eggs problem

On allegations that cartels hid egg supplies before and after the 15th General Election (GE15), he described them as baseless.

In fact, Azman said the ministry did not receive any complaints regarding such activities.

"If it happens, consumers can always lodge a report to us and our Enforcement Division will investigate,” he said.

On the issue of a price hike for eggs, he said action could be taken against industry players under the Price Control Act and Anti-Profiteering Act 2011 if they were found to have flouted the law. – Bernama