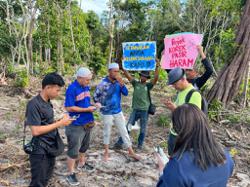 IPOH: Some 33 barrels containing hazardous liquid were found near the Rural Transformation Centre in Gopeng.

According to a Perak Fire and Rescue Department spokesman, the barrels were believed to have been dumped in an open area near the centre by some irresponsible body.

"We received a call at about 5pm about the barrels.

"When we arrived, we found the barrels to be leaking as well," he said in a statement.

According to the Environmental Department website, SW 402 is the code for spent alkalis with pH more or equal to 11.5, which are corrosive or hazardous.

The spokesman said its personnel conducted a size-up and cordoned off the area.

"The Pasir Puteh Fire and Rescue Department Hazardous Materials (Hazmat) Unit were called in to assist with the operation.

"They conducted sampling on the spot and covered the liquid with sand," he said, adding that the operation also involved the police and the state Environment Department.

"A detection test was then conducted again to ensure the hazardous liquid was no longer present," he added.

The operation ended at 8.35pm.

"The matter is still being handled by the Hazmat unit and would only hand over to us when everything is clear," he added.