IPOH: The number of registered voters for the Tambun parliamentary constituency has increased by about 49%, says the Election Commission (EC).

Perak EC director Mohd Nazri Ismail said as of Oct 20, Tambun has the highest number of registered voters in the state, with about 160,000 people eligible to vote there in the 15th General Election (GE15).

Mohd Nazri said most of the voters in Tambun were in the Manjoi state constituency, totalling about 86,000 people.

Manjoi is one of two state seats under Tambun, a Malay-majority constituency; the other is Hulu Kinta.

“Tambun has a lot of people, including youths, with many of them working in Ipoh but living in the federal constituency,” he said when met at the state EC office here yesterday.

Perak, together with Perlis and Pahang, is the only state that will hold its state election concurrently.

“We are still updating our database. There are still some names that are duplicated, some voters who have passed away but their names are still in our data, and some who have lost their citizenship,” he said.

“There was one case in Gerik, where one person aged 104 died in India, but it was not reported to us.

“As long as the family does not inform us, we cannot remove the name from the registry,” he added.

Mohd Nazri said there were 953 polling stations in the state, and these included 72 centres for early voters like the police and armed forces. 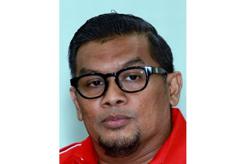