PETALING JAYA: There are no video recordings involving Datuk Seri Najib Razak that have been recorded by any media agencies inside the prison premises, says the Prisons Department.

The department was responding to viral claims on social media after the former prime minister was seen in a programme broadcast on TV1 on Oct 24, 2022.

It said based on initial checks, the video was pre-recorded by Radio Televisyen Malaysia (RTM) in conjunction with Kembara Keluarga Malaysia, Episode 57, before Najib was sent to prison.

"The video, which was aired on TV1 on Oct 24, 2022, shares the history and background of Pekan, Pahang and was not related to politics," the Prisons Department said in a statement Tuesday (Oct 25).

Screenshots of Najib, who is currently serving a 12-year jail term at the Kajang prison, went viral on social media with some alleging that he was being given airtime to campaign for the 15th General Election.

Internet users expressed shock and questioned how Najib managed to get airtime while he was in prison.

The Prisons Department urged the public not to spread anything without verifying the information.

"Legal action can also be taken against irresponsible individuals," it said.

Najib was sent to Kajang Prison on Aug 23 after the Federal Court upheld a 12-year prison sentence and an RM210mil fine against him for misappropriating SRC International Sdn Bhd’s funds amounting to RM42mil.

Previously, the Prisons Department had said inmates are not allowed to issue any statement for the purpose of campaigning in the GE15. 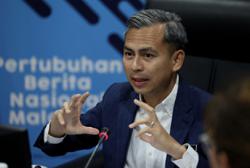