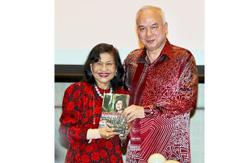 Justice Ahmad Bache ruled that Najib (pic) as the plaintiff has the right to hear his civil case.

"If in a criminal trial, an order to produce may be made. It (the striking-out application) may be interlocutory in nature. This court agrees with your application and allows the order as applied,” said the judge via online proceedings.

On Oct 21, the court is scheduled to continue hearing Thomas’ application to strike out Najib's suit.

At the outset, Najib’s counsel Yudistra Darma Dorai submitted that the court has the power to grant an ex-parte application by his client, who is currently serving a 12-year jail sentence in the Kajang Prison, to attend court proceedings under Section 30 of Prisons Act.

Section 30 stated that whenever the presence of a prisoner is required in a court having civil or criminal jurisdiction, the court may issue an order in the prescribed form addressed to the officer-in-charge requiring the production of that prisoner at the time and place to be named in the order.

On Oct 22 last year, Najib filed the suit claiming that the charges against him were part of a move that had been planned in advance by Thomas and it was also in line with the Pakatan Harapan government’s plan at the time.

Najib, 69, claimed that he had been wrongly accused in court in the case of 1Malaysia Development Berhad, International Petroleum Investment Company (IPIC), abuse of power under the Malaysian Anti-Corruption Commission (MACC) Act 2009 and money laundering under the Anti-Money Laundering, Anti-Terrorism Financing and Proceeds of Unlawful Activities Act 2001.

He is seeking a declaration that Thomas has committed misfeasance in public office as well as RM1.9mil in damages including negotiation fees for the audit team to review documentation for the preparation of facts to deal with the prosecution against him. - Bernama