Spotlight on PSI in Penang

GEORGE TOWN: In Penang, where 13 parliamentary seats are up for grabs, one issue that is likely to dominate political ceramah and conversations will be the proposed Penang South Islands (PSI) project.

After it was rejected by the Department of Environment appeal board, SRS Consortium (SRS) resubmitted a fresh environmental impact assessment (EIA) report in March.

PSI is designed to fund the master plan, which includes the Pan Island Link and Bayan Lepas Light Rail Transit.

The mega project off the southern coast of Penang island involves the reclamation and development of three islands covering 1,820ha – namely Island A (930ha), Island B (566ha) and Island C (324ha).

In the past, several politicians from both sides of the divide including Permatang Pauh MP Nurul Izzah Anwar and Kepala Batas MP Datuk Seri Reezal Merican Naina Merican had voiced out against the project, claiming that it could affect the livelihood of the fishermen in that area.

The magnitude of the reclamation worries NGOs and environmental activists, who decry the project’s possible impact on the marine environment and fishermen, despite explanations and assurances by the state government.

And the RM6.3bil Penang undersea tunnel project linking Gurney Drive on the island with Bagan Ajam in mainland Butterworth is another potential hot-button issue in any ceramah.

Although initial work on new roads on the island meant to disperse traffic began in 2016, the long-delayed feasibility study of the 7.2km tunnel itself was only presented by the tunnel concession company Consortium Zenith Construction Sdn Bhd (CZC) to the state early this year.

However, the state government will only make a decision on the implementation of the project after considering the written reviews from the Penang Port Commission and the Penang Port Sdn Bhd, which have strong reservations about the project.

And not forgetting the flood problems plaguing Penangites almost each year. This will be another issue the Opposition here will be harping on throughout the campaigning period.

Since the massive floods in 2017 which saw seven people drown, Penang has not seen any major flooding.

But in September this year, a downpour struck the south-east of Penang island, and even the Penang International Airport was not spared.

Social media videos showed floodwaters flowing into the arrival hall on the ground floor, and three arriving flights had to be diverted.

Traffic jams are another issue that won’t go away for a while more.

Those days, they only happened during peak seasons or school holidays in December. Now, they are occurring even on normal weekends.

The politicians can say or promise whatever during their ceramah, but when the people go to the ballot box, it is the candidates with their welfare at heart that will get their vote. Not the orators. 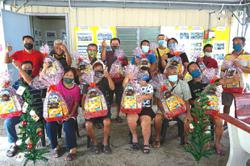