SEPANG: Two brothers, aged nine and 10 years old, were killed after they were electrocuted while bathing in a basin at the compound of their home in Kampung Teras Jernang.

"The victims were the second and third of four children.

"The victim's father saw his two sons bathing in the basin before he went out to a nearby shop. However, when he came back, he discovered his sons were not breathing," he said when contacted on Saturday (Oct 1).

He said the father realised that his sons were electrocuted.

"The electricity was believed to have been from a nearby metal clothes hanger.

"Tenaga Nasional Berhad (TNB) confirmed the source of the electricity was friction between a wire at the side of the house and the house's zinc, which caused electricity to flow to the clothes hanger.

"Both victims were electrocuted from the clothes hanger which was in the bathing area," he said.

ACP Wan Kamarul Azrul said there were used metals placed haphazardly around the house as the father previously owned a car workshop, which has since closed down.

"He had to bring all the items at the workshop back home.

"The victims' bodies have been sent to Hospital Serdang for post-mortem," he said.

The victims' parents were owners of a restaurant in Teras Jernang, he said.

"We advise all parents to be careful and not let exposed wires or electrical appliances lying around unattended," he said. 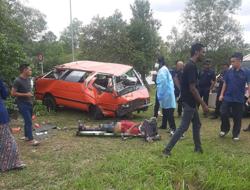