JOHOR BARU: The Johor Baru City Council (MBJB) flood mitigation project will start next month as part of the medium-term plan to address flash flood problems in the city.

“We are allocating a RM5mil budget for the project which includes installing six water pumps and constructing nine weirs,’’ he told reporters after the MBJB full board meeting on Thursday (Sept 29).

A weir or low head dam is a barrier across the width of a river that alters the flow characteristics of water and usually results in a change in the height of the river level.

Weirs are also used to control the flow of water for outlets of lakes, ponds and reservoirs.

He said the weirs would be built upstream of the river starting from the Teachers Education Temenggong Ibrahim until Tanjung Nakhoda development site.

He said the project would cover a 5km stretch of the 8km river as the stretch was the most vulnerable to flash floods.

“We are expecting the project to be completed within six months from October this year,’’ he said.

In a related matter, Noorazam also hoped the Federal Government would allocate money under Budget 2023 to be for long-term flood mitigation projects for Johor Baru city.

He said it was important for the city to have a long-term flood mitigation project to be undertaken by the Department of Irrigation and Drainage.

Noorazam said a comprehensive study was needed to look into the existing drainage network and how to improve it to prevent flash floods from occurring in the future.

He said the study among others would cover the drainage network in areas in Segget, Stulang, Jalan Abdul Samad which includes the Sultanah Aminah Hospital and Sungai Chat.

In other matters, starting from January 2023, MBJB would also approve the planning development plan if developers agreed to build flood retention ponds and plant trees before starting their projects.

“Failing to do so, we will not give the green light to them and they cannot start the project,’’ said Noorazam. 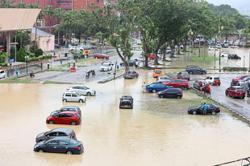