Man jailed for 17 years for causing death of OKU colleague

KUALA LUMPUR: A secondhand shop worker who was earlier charged with murdering a man, was sentenced to 17 years in jail by the High Court here Thursday (Sept 29) for causing the death of a colleague with disabilities three years ago.

Judge Aslam Zainuddin handed down the punishment on A. Raventiran, 40, after he pleaded guilty to the charge and ordered the jail sentence to commence from the date of his arrest on Oct 31, 2019.

According to the amended charge, Raventiran was charged with intent to cause the death of R.Vijaya Kumar, 47, at a location in Jalan Sungai Besi, Cheras here between 1.30am and 12.34pm on Oct 31, 2019.

In the proceeding, the prosecution was led by deputy public prosecutor Annur Atiqah Abd Hadi while counsel Stanley Clement Augustine represented the accused.

Thirteen prosecution witnesses were called to testify in the trial which began on May 3, 2021. - Bernama 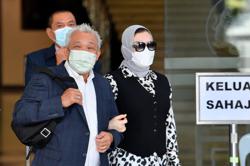