NEW YORK: At a time when the world is facing serious climate change and forest degradation due to development, Malaysia still has 54% of forested areas across the country, says Datuk Seri Ismail Sabri Yaakob.

The Prime Minister was also confident that the percentage would increase following ongoing aggressive reforestation measures.

He said as one of only 17 bio-diverse countries in the world, Malaysia is aware of its responsibility to maintain and preserve its natural resources for future generations.

"During the Earth Summit in 1992, Malaysia pledged to maintain at least 50% of its land mass under forest and tree cover,” he said when delivering Malaysia’s National Statement at the 77th Session of the United Nations General Assembly (UNGA) here on Friday (Sept 23).

He said climate change was a universal problem affecting the entire world, and Malaysia was not spared as, last year alone, it was struck by the most serious floods in its history, resulting in losses estimated at US$1.4bil (RM6.1bil).

"Many lives were lost and almost 100,000 people had to be moved to temporary evacuation centres.

"This situation happens not only in Malaysia but in several other countries as well. Clearly, mitigation and adaptation measures need to continue,” he said.

He reiterated Malaysia’s commitment to carrying out its responsibilities and roles to ensure environmental conservation and sustainability.

In this context, he said various measures have been implemented by Malaysia, such as introducing the Malaysian Sustainable Palm Oil (MSPO) standard to meet requirements for the purpose of sustainable development.

He said Malaysia was also committed to reducing greenhouse gas emissions by 45% based on Gross Domestic Product (GDP) by 2030.

"In this regard, Malaysia has set a target of achieving 31% renewable energy use by 2025. Malaysia is also committed to achieving its goal of net zero greenhouse gas emissions by 2050,” he added. - Bernama 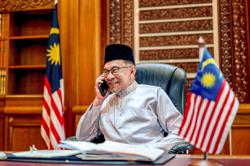