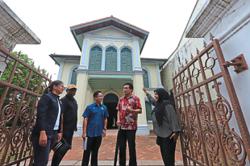 GEORGE TOWN: A once lustrous double-storey heritage building, believed to be more than 150 years old, has been restored and is now on the rental market.

Nestled in the heart of the city, the historic Category One-class heritage building was once the home of powerful Acehnese merchant Syed Mohd Al-Attas in the mid-19th century and was known as the Syed Al-Attas Mansion.

It was later owned by a businessman from the Southern Indian Chettiar community and subsequently became the Penang Heritage Centre in the late 1990s.

Currently owned by the Penang Island City Council (MBPP), the sprawling bungalow with the address 128 Armenian Street is at the junction with Acheh Street.

The mansion had been left in disuse, leading to termite infestation, rotted timber flooring, a leaking roof and damaged walls.

This was despite several renovations carried out whenever its ownership changed in the past.

"The restoration was a joint collaboration with the George Town Conservation and Development Corporation (GTCDC).

"The work took two years and was completed on June 14.

"It was delayed a bit due to the Covid-19 pandemic," he said.

Wong said the council hoped to rent it out for commercial purposes but was open to ideas from applicants.

"We will give preference to those who want to use it for heritage purposes like a museum.

"We are not (ruling out) anything but we will look into all requests when deciding on the tenant.

"It is a nice heritage building and we hope to have a good tenant to help maintain and protect the building.

"We hope the (eventual) tenant will consider utilising this place to promote heritage values or anything relevant to George Town and its uniqueness," he said.

The rental period is for a minimum of three years and interested parties may attend the site visit and briefing at 9.30am on Monday (Sept 26). 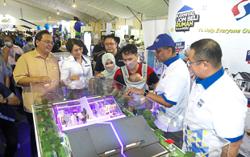