Police to call up Hadi for racist comments 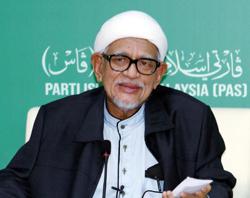 PETALING JAYA: The police will be calling up PAS president Tan Sri Abdul Hadi Awang in connection with his remarks that non-Muslims and non-bumiputra are the causes of corruption in the country.

“Investigations are being conducted by the Prosecution and Law Division (D5) of the Criminal Investigation Department (CID), Bukit Aman, under Section 505 (C) of the Penal Code and Section 233 of the Communications and Multimedia Act 1998.

“He will also be called to Bukit Aman to assist investigations,” he said in a statement yesterday.

Section 233 of the Communications and Multimedia Act 1998 is for improper use of network facilities or network services.

ACP Skandaguru also urged the public not to speculate or make any statements that could disrupt the investigation process.

Abdul Hadi came under fire for claiming that the root cause of corruption in the country was the influence non-Malays wielded over the economy and politics.

He said this had allowed non-Malays to dictate terms to the Malays, which in turn made the Malays become corrupted and entangled in financial scandals.

The PAS leader’s comments were roundly criticised by many Malaysians.

He said that corruption had nothing to do with race or religion.

“This is an obvious fact and basic common sense.”

He said Abdul Hadi had failed to prove his accusations with facts, analysis, empirical evidence or scientific grounds.

“This indicates that his allegations are utter nonsense,” he said.