This comes after the Boustead Heavy Industries Corporation Berhad (BHIC) declassified its forensic audit report into the LCS project on Monday (Aug 22) night.

PAC chairman Wong Kah Woh said the report is however based on the audit mandate from the 2011 to 2014 financial year only.

Although most of the letters of award (LOAs) were issued by Boustead Naval Shipyard Sdn Bhd (BNS) during this period, the implementation was until at least 2018, said Wong.

"The report found that as long as all transactions and activities related to the implementation up until 2018 have not been investigated in depth, it is possible that important facts to prove criminal conduct would be omitted," said Wong in a statement on Monday (Aug 22).

Hence, the PAC is urging the Cabinet to direct that further forensic audit be carried out by BHIC on the LCS project to complete all transactions and activities related to the implementation of the project and LOAs from 2015 until now.

ALSO READ : LCS has ballooned into a RM11bil scandal now

He also called for the New Generation Patrol Vessel (NGPV) probe report to also be made public.

"Given that the issue of use of LCS allocation for the payment of NGPV, bad debts by BNS, the Government, Governance, Procurement and Finance Investigation Committee's (JKSTUPKK) report on the six patrol vessels (NGPV), the Integrated Logistics Support and Commercial Package Programme by the Navy should also be declassified," he said.

According to Wong, the government signed a supplemental NGPV contract with BNS with an additional allocation of RM1.4bil, which raised the total contract price for the six vessels from RM5.35bil from RM6.75bil, although the scope of works and total number of patrol vessels remained the same.

"The sixth patrol vessel was delivered to the Royal Malaysian Navy in 2010.

"This project was followed by the LCS project in 2011, which was also given to BNS," said Wong.

The declassified forensic audit on LCS by BHIC is available for public viewing on the PAC website at https://www.parlimen.gov.my/pac/review/docs-257-319.pdf. 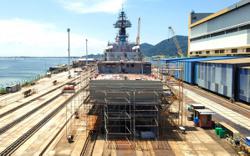