The guilty in LCS scandal will pay, says Hisham 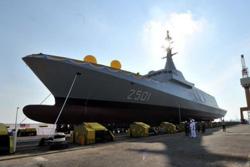 THOSE found guilty in the multibillion-ringgit littoral combat ship (LCS) issue will have to face the music and will not be simply let off.

“The MACC investigations are still ongoing and those involved with wrongdoings in the project will not be simply let off,” he said in a statement yesterday.

He also acknowledged that Parliament’s Public Account Committee (PAC) had recommended that the Malaysia Anti-Corruption Commission (MACC) speed up its investigations and prosecution.

He added that the ministry had given its cooperation to the MACC during its investigations.

Hishammuddin was responding to the PAC’s 250-page report on the LCS project that was tabled in the Dewan Rakyat yesterday, which revealed that some RM1.4bil in government allocations had been diverted for other purposes.

He said his ministry and the stakeholders would take into consideration the PAC recommendations with regard to the continuation of the LCS project but reiterated that project would continue.

He noted that several oversight committees were set up in April to revive the project within the next six months and submit a progress report to the Cabinet.