The post has been vacant since Segamat MP Datuk Seri Dr Edmund Santhara Kumar resigned from the position last month.

Santhara was the first non-bumiputra MP to join Bersatu in August 2020.

The former PKR man, who is also Deputy Tourism, Arts and Culture Minister, was made the head of the wing in September last year.

Chong was the wing's deputy head prior to Tuesday's appointment.

“To boost our associate members’ involvement in Bersatu’s work and machinery, the party has unanimously agreed to appoint Chong as the new Bersatu associate member’s wing head,” he said in a statement on Wednesday (Aug 3).

ALSO READ: Setting up of Srikandi Muda wing on the agenda of Bersatu assembly, says Hamzah

Hamzah said in line with Bersatu’s decision to set up a Srikandi Muda wing, the meeting also decided to appoint Nurul Fadzilah Kamaluddin as its chief while Suhainna Jamri is deputy chief.

“These appointments are among important decisions made to complete the party’s organisational structure at the central level.

“It is also reflective of our readiness to face the general election that can be called anytime,” he said.

During its general assembly last year, Bersatu had approved nine amendments to the party’s constitution to set up the Srikandi Muda wing for young women. 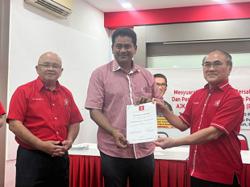