KOTA BELUD: Community acceptance and cooperation on the Kinabalu Geopark initiative, which covers the three districts of Ranau, Kota Belud and Kota Marudu, are important criteria in the assessment before its status can be ratified as a United Nations Educational, Scientific and Cultural Organisation (Unesco) Global Geopark.

National Cultural Council member Dr Paul Porodong said that this synergy was important as one of the aspects seen in the geopark area - which is how a local community fused its culture with the unique geological landscape for their benefit.

Paul, who is also the cultural advisor for Kinabalu Geopark, said that the Unesco team (which arrived on July 18) also has a critical eye on culture, apart from an evaluation of the physical nature of rocks, flora and fauna.

"The bioculture needs to be seen alive and vibrantly active, along with evidence to show that the cultural component is related to the biophysics and biodiversity of the geopark.

"Here (in Kota Belud), we can see the Bajau community, with the biophysical position of paddy fields and the iconic view of Mount Kinabalu blending into a tourism product,” he told Bernama during the final evaluation tour of Kinabalu Geopark as a Unesco Global Geopark site, here, Thursday (July 20).

Paul said that the combination of the three inter-related elements (ABC: Abiotic geological feature, Biotic biodiversity marvel and Cultural aspects) would be observed closely by the assessors, in addition to contributing to the well-being of the community.

Citing an example of communities living on the foothills of Mount Kinabalu, such as in Kampung Kiau, Paul said that the village community’s reliance on the unique topography counts, as they have adapted to the hilly terrain with highland agriculture.

Meanwhile, Paul said that the biodiversity density in the geopark area was also high, especially in the northern region, and had one ethnicity per 40 sq km compared with outside the geopark area.

"We are trying to explain to the assessors (from Unesco) about the community here (in the geopark), about the relationship of community activities and way of life and its relationship with the physical environment and biological diversity, especially in relation to the landscape against the backdrop of Mount Kinabalu,” he said.

He explained that the local community believes that Mount Kinabalu is an abode where the spirits of their ancestors return to dwell.

Mount Kinabalu has long been known as "Aki Nabalu" by the locals, and in the Kadazandusun language, the word "Aki" means ancestor and "Nabalu" means place or mountain, the whole meaning being the ancestral mountain or place of abode where ancestral spirits return.

During the four-day assessment tour conducted by the evaluators from Unesco, they also visited several areas that demonstrate the local culture, such as Paranauan Inn D'Sangkir in Kota Belud, Walai Tobilung and Sungai Baliajong in Kota Marudu. - Bernama 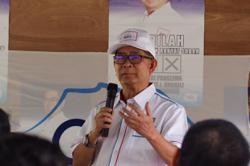