KUALA LUMPUR: Former TV3 newsreader Zalina Shaharah Azman, who has been reported missing, may have been spotted at a cafe in Shah Alam recently.

An individual who goes by the name Mosyuki Borhan (Yuki) via his Twitter account claimed that a woman who looked like Zalina appeared at his cafe in Section 9, Shah Alam Selangor at about 1pm on Sunday (July 17).

He said she looked anxious and was shivering with fear. 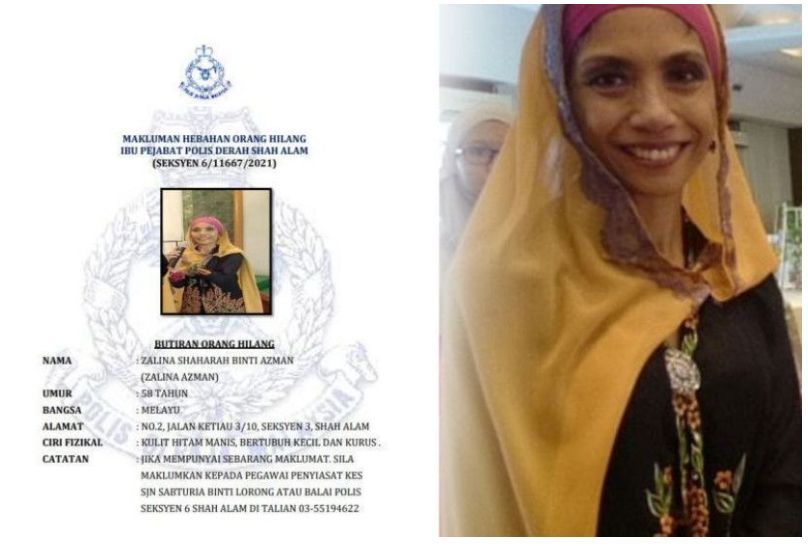 "When she was at the counter to order food, she looked back, left and right.

"It was a bit odd and when I asked her if everything was okay, she kept mum.

"Another employee asked her to take a seat and take the order later.

"She did not speak much but the only thing she said was 'I am afraid of metal'.

"She sounded afraid, like something had happened," mStar quoted him as saying on social media.

ALSO READ: Missing ex-newsreader kept to herself, did not mingle much: Neighbours

Mosyuki further said the woman's reaction may have been due to his cafe having plenty of metal (his cafe has metal bars and windows with metal mesh).

He said at first, the woman seemed afraid to enter the cafe and stood for a long time in front of the door.

ALSO READ: Inform cops if you have any info on missing newscaster, public urged

"I am unsure why she behaved that way but she could have been hesitant to enter as the doorknob is metal as well.

"When she was about to leave the shop, she hit the door probably because she did not want to hold the knob.

"I felt bad seeing her that way as she seemed hungry but she left.

"She seemed insecure, scared and looked like she felt threatened," he said.

Mosyuki said they went out of the shop to see which direction the woman was headed.

"She walked aimlessly like she was looking for something, but fast.

"At that point we just hoped she was safe as we did not even manage to offer her food," he said.

Mosyuki said the incident was stuck in his mind and he was shocked when he read the news on Monday (July 18) of Zalina's disappearance.

He said he felt uneasy about the incident as the description was similar to the woman he met at his cafe.

"I immediately went to the police headquarters in Shah Alam to inform them.

"Her demeanour, size and skin colour matched the description of the police report (on Zalina's disappearance).

"The police told me the person I described was wearing the same attire as Zalina when she disappeared.

"She was wearing a jacket. "Although it has not been confirmed that the woman who was at my cafe is Zalina. I wanted to inform the authorities as I am worried about her mysterious disappearance.

"This is the first time I saw someone so afraid of metal.

"I am worried that this woman has been kidnapped or tortured to the point of trauma when seeing metal.

"She was only holding money, she did not have a wallet or other belongings.

"Even her shoes were not worn properly as the straps were not tied," he said.

Zalina, 58, previously hosted several talk shows, including Money Matters on TV3. She was reported missing by her son Mikhael Norman, 33, on Nov 29, 2021.

Mikhael wanted to tell her that her grandfather had been admitted to the hospital, but she could not be reached.

“On Nov 29, 2021, Mikhael and his uncle went to Zalina’s house in Section 3, Shah Alam, and found her car parked there,” ACP Mohd Iqbal said.

He added that Zalina lived alone and they found her house in disarray.

“They also found the victim’s purse containing her identity card, driving licence, bank cards, credit cards, RM600 cash and a car key,” he said, adding that there had been no trace of Zalina despite various efforts to find her.

Meanwhile, Bernama reported that Zalina’s neighbours did not really know her as she seldom socialised with them.

Missing ex-newsreader kept to herself, did not mingle much: Neighbours