Sabah IDS chairman Datuk Adeline Leong said it would be collaborating with the state library in efforts to build up the centre that will eventually house data on Sabah’s history.

“The centre will be a dedicated repository to compile, collect, source, secure, keep and maintain all documents and books of antiquity with regards to North Borneo.

“The process of digitising all documentation related to the history of North Borneo has to be done meticulously to preserve and narrate Sabah’s history,” she said after a meeting with Sabah Library director Fatimah Abdillah.

Leong, who was Sabah’s first library director, said the process of finding books, documents and referencing had become much easier through digitalisation and technological advancements adopted by the library in the past decade.

“The library is more than just a place to store books. The world is in the digital era now and it is our duty to also upgrade ourselves and our amenities to remain relevant and move forward,” she added.

The NBHRC, which was approved by Chief Minister Datuk Seri Hajiji Noor, will be housed under IDS and headed by historical researcher Shari Jeffri.

The need to have a factual narrative on Sabah’s history especially in relations to the Sulu claim emerged after self-proclaimed heirs to the defunct Sulu Sultanate earlier this year obtained an order from an Arbitration Court in France for Malaysia to pay them RM64bil.

Malaysia is challenging the decision.

Local historians have since disputed the so-called Sulu Sultanate’s claim over Sabah based on historical documents obtained from Brunei and other sources.

Last month, IDS chief executive officer Dr Ramzah Dambul told The Star that the research centre would not be a “mere repository centre” for the documents but would also act as a platform for activities leading to the issue of the Sulu claims.

Following the Paris court decision, the Sabah Law Society had been pressing the state government to set up a repository that will put in place all documented perspective of Sabah’s history with regards to the Sulu sultanate for the Federal Government’s reference. 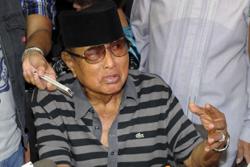 Congress on bronchology and interventional pulmonology to be held in Serdang Hospital from Aug 12-14
Boustead Holdings was never in the red when I was PM, claims Najib
Nurul Izzah to lead Penang, Kedah and Perlis to face GE15
Works Ministry ready to deal with floods
Court of Appeal: Citizenship for children born overseas if father is Malaysian
Datuk Seri among 25 nabbed at wild party in Janda Baik
Elderly woman believed to be part of tyre scam syndicate in Melaka
Dept heads must ensure only Malay language used at official functions
Decomposing body of woman found behind Tebobon petrol station
Shahrir received a cheque of RM1mil from Najib, bank manager tells court