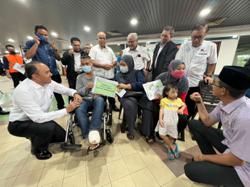 BALING:: The Kedah state government will bear the temporary six-month rental accommodation for victims who lost their homes due to flooding that occurred here on Monday (July 4) afternoon.

Kedah Menteri Besar Datuk Seri Muhammad Sanusi Md Nor said so far, 15 houses had been rendered uninhabitable, including some swept away by strong currents in the disaster.

"The government has decided to provide temporary accommodation for villagers who will be homeless for six months. We will rent housing for these families along with the items that they could salvage. The (state) government will pay the rent," he said at a press conference after chairing the executive council at the Baling District and Land Office here on Wednesday (July 6).

Muhammad Sanusi said the state would help rebuild new housing for homeless residents but added that there were constraints in terms of land ownership issues.

He said most of the houses that were swept away near the river were built on reserve land (along the riverbank) without ownership.

"If they own land at other sites, it is easier. If they do not have land, we first have to find a placement, which means it will take a longer time. Hopefully, this (issue) can be resolved quickly," he said, adding that there were 12 villages comprising 627 residents affected by the floods.

Apart from that, he said so far, a total of 14 houses were reported damaged and needed major repairs while the number of houses with minor damages was still being determined.

Meanwhile, Muhammad Sanusi said the movement of volunteers here on relief mission was being coordinated by the Operations Room to ensure that aid reached all the villagers affected by the disaster.

"When these volunteers contact us, we point them towards villages that have not yet received assistance. (So) don't just focus on the damaged bridge area (in Kampung Iboi), which is already filled to the brim (with relief parties).

"There are other villages and areas with houses to be cleaned up, so we direct them to places where there are no volunteers yet," he said, adding that the Federal Territory Islamic Religious Council (MAIWP) intended to help the flood victims with a substantial amount. - Bernama