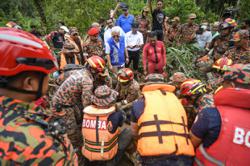 Salmah’s husband, Abd Rahman Said, 71, said prior to that he received a call from Nurul Hanis to inform about the rising flood water.

"It was about 4pm and I was not at home, but when I got home, the house was no longer there and the bridge had also been swept away," he said when met by reporters at the flood relief centre (PPS) at SMK Jerai here Tuesday (July 5).

He said the flood was the worst to hit the area.

Nurul Hanis' husband, Khairul Ashraf Nor Azman, 24, said he was at work in Penang and immediately rushed home when informed by his sister about the incident.

"I had planned to come home today to take her for her maternity check-up,” he said, adding that his wife is pregnant with their first child.

The couple, who got married last February, was resident in Penang, before the wife decided to move in with her mother-in-law to help look after the older woman who is bedridden following a stroke.

He said the police had launched a search and rescue operation, but as of 2am today, they had not been found.

"The operation could not continue as the place was dark,” he said, adding that the search and rescue operation would be continued at 7am today. - Bernama 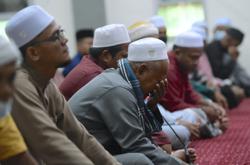