Dr Mahathir said he had stated his opposition to Tan Sri Mohamed Apandi Ali's appointment as chairman of the special task force in letters dated May 23 and June 21.

"Again, no answers were given to my requests. The opposition was made after I obtained legal advice from (my) lawyers.

"So, there were no issues of a last-minute objection. Instead, my objection was never addressed," the Langkawi MP said in a statement on Thursday (June 30).

Dr Mahathir also denied allegations by Wan Junaidi that he was late in expressing concerns over the special task force.

"I'm prepared to cooperate with any proceedings or interviews if the special task force consists of people with no interest.

"I'm even more disappointed when there is a law minister who seems to not understand the basis of law, moreover on issues involving national sovereignty," said Dr Mahathir.

In a statement on Wednesday (June 29), Wan Junaidi criticised Dr Mahathir for abruptly leaving a scheduled morning interview session on Tuesday (June 28) at the Attorney General's Chambers after finding out that Mohamed Apandi was still the task force chairman.

According to Dr Mahathir, he first stated his objection in the May 23 letter.

In it, he argued that there were elements of a conflict of interest, as Mohamed Apandi had been the official who sought review of the case at the International Court of Justice (ICJ).

"His (Mohamed Apandi) services as AG were discontinued by me when I became the seventh prime minister, and on the Batu Puteh issue, he had openly criticised the Pakatan Harapan government's decision not to appeal the ICJ decision.

"He (Mohamed Apandi) was a petitioner in this case and appointing him as a head of this body goes against the 'rule of law' and 'natural justice' that clearly stated 'no man shall be the judge of his own cause'," said Dr Mahathir.

However, Dr Mahathir said his concerns were ignored and he was told to attend Tuesday's session with Datuk Dr Baljit Singh Sidhu and Datuk Tengku Ahmad Fuad Tengku Ahmad Burhanuddin nominated to interview him.

Dr Mahathir said he also sent another letter on June 21 to state his opposition to Baljit Singh and Tengku Ahmad's appointment as interviewers, and sought clarification on Mohamed Apandi's appointment as task force chairman.

Dr Mahathir said the duo were lawyers for Mohamed Apandi in his suit against the former premier for terminating his services as attorney general in 2018.

He also said Wan Junaidi's remarks on Wednesday had cast aspersions on him by saying that he refused to cooperate in the interview session by the special task force.

"The minister's statement is inaccurate and confusing. It seems as though I wasn't cooperating in the interview session," said the nonagenarian.

Wan Junaidi had said Dr Mahathir was told of Mohamed Apandi's appointment as chairman earlier on, and could have refused to attend the Tuesday session.

Wan Junaidi said he was disappointed with Dr Mahathir's refusal to cooperate, but stressed that the task force would continue its commitment and duty to produce a final report on the issue.

Wan Junaidi also said it was impossible to remove Mohamed Apandi without any justification because the Cabinet decided on his appointment as chairman and the special task force had been carrying out its duty for seven months.

The Cabinet agreed to form the task force on Oct 29.

In 2018, the Pakatan government led by Dr Mahathir had decided to drop an application to review the Batu Puteh case at the ICJ.

The application was to have been heard in June that year as a bid to overturn ICJ’s ruling awarding legal jurisdiction of Batu Puteh to Singapore in 2008.

Dr M: What I said about lost land was to put Pulau Batu Puteh issue in perspective 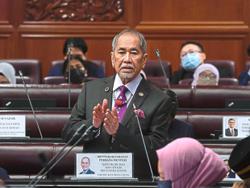