PETALING JAYA: There will be no change in the leadership of the Batu Puteh special task force despite objections from certain quarters, says Datuk Seri Wan Junaidi Tuanku Jaafar.

The de facto law minister said Tan Sri Mohamed Apandi Ali would not be removed from the task force and interviews would carry on despite Tun Dr Mahathir Mohamad's refusal to attend inquiries.

He said the special task force only wanted to hear views regarding the government's decision to withdraw its application to appeal the 2008 International Court of Justice (ICJ) decision that Singapore had sovereignty over Batu Puteh.

"Dr Mahathir was informed of the appointment of the chairman of the special task force and he could've refused to attend the session on Tuesday (June 28) morning at the Attorney General's Chambers (AGC)," said the Santubong MP in a statement on Wednesday (June 29).

Wan Junaidi was commenting on Dr Mahathir, who left a scheduled morning interview session on Tuesday (June 24) at the AGC after finding out that Mohamed Apandi was still the chairman of the task force.

Wan Junaidi said the panellist who was supposed to interview Dr Mahathir was surprised at the former premier's abrupt decision to leave.

"Panellists were shocked and issues that could have been shared by him were not obtained by the special task force," said Wan Junaidi.

Wan Junaidi said he was disappointed at Dr Mahathir's refusal to cooperate, but said that the task force would continue its commitment and duty to produce a final report to scrutinise the matter involving the sovereignty of Batu Puteh, Batuan Tengah and Tubir Selatan and the government's decision to retract its appeal in 2018.

"The task force will continue its commitment and responsibilities to produce a final report as planned," added Wan Junaidi.

Wan Junaidi said Mohamed Apandi was appointed as the chairman of the special task force following the Cabinet's decision on Oct 29 and any opposition towards the matter should have been mentioned earlier.

"The special task force has carried out their duties for seven months and an interim report was produced, while a final report and follow-up actions are being prepared at the moment.

"It is impossible for me to remove Mohamed Apandi without any justification if the Cabinet has already decided on his appointment," added Wan Junaidi.

Dr Mahathir had said that he would not attend any inquiries by the panel as long as Mohamed Apandi chairs the Batu Puteh special task force.

"Mohamed Apandi is a person with involvement with this case, he should not be chairman, Instead he should be a witness," he said, adding that there was a conflict of interest.

Dr Mahathir had said he was more than willing to cooperate with the task force if Mohamed Apandi was removed as its chairman.

On Oct 29 last year, the Cabinet agreed to form the task force after the Dr Mahathir-led Pakatan Harapan government decided to drop an application to review the Batu Puteh case at the International Court of Justice (ICJ) in 2018.

The government then withdrew the application, which was to have been heard in June that year, to review the ICJ ruling awarding legal jurisdiction of Batu Puteh to Singapore in 2008.

Dr M: What I said about lost land was to put Pulau Batu Puteh issue in perspective 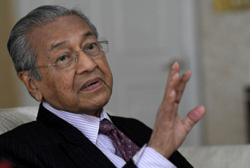