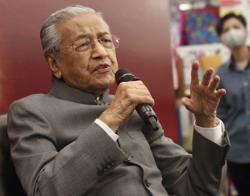 PUTRAJAYA: As long as former attorney general Tan Sri Apandi Ali remains the chairman of the Batu Puteh special task force, Tun Dr Mahathir Mohamad says he will not attend any inquiries by the panel.

The former prime minister came to the Attorney-General Chambers here on Tuesday (June 28) morning for an interview session with the task force but left as soon as he found out that Apandi was still its chairman.

"I wrote to the AGC seeking an explanation on why Apandi was chosen as chairman of this task force.

"Apandi is a person with involvement in this case, he should not be chairman. Instead, he should be a witness.

"But here, he is appointed as a chairman which is ridiculous. There is conflict of interest," said Dr Mahathir.

"I was invited to attend any inquiry here today, so I came. They told me the chairman was still Apandi.

"If they had said this in a reply to my letters, I wouldn't have even come today," he said to reporters after leaving the AGC.

Dr Mahathir said he was more than willing to cooperate with the task force if Apandi was removed as chairman.

"I will give the task force my cooperation and will give all the information that is needed. I will tell the truth as I am quite sure a lot of people have given wrong information.

On Oct 29 last year, the Cabinet agreed to the forming of the task force after the Dr Mahathir-led Pakatan Harapan government in 2018 decided to drop an application to review the Batu Puteh case at the International Court of Justice (ICJ).

The government then withdrew the application, which was to have been heard in June that year, to overturn ICJ’s ruling awarding legal jurisdiction of Batu Puteh to Singapore in 2008. 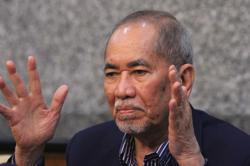