"The government must realise that with the formation of the (special team), the NRC chaired by (former prime minister) Tan Sri Muhyiddin Yassin is no longer needed or effective, and goes against the latest efforts by the government to address issues faced by the people," the Umno president said on Facebook on Thursday (June 30).

Ahmad Zahid also said the NRC did not produce much results and was established only as an advisory platform.

"The NRC is also a platform for Muhyiddin to boost his own image and his party's, and not particularly for the people or national interest," added the Bagan Datuk MP.

On Wednesday (June 29), Prime Minister Datuk Seri Ismail Sabri Yaakob announced the formation of the special team, which received the Cabinet's nod to address inflation in the country.

It will be responsible for gathering information from ministries, agencies and the public to formulate strategies and coordinate actions to resolve inflation-related issues, particularly on efficiently managing the increase in prices of goods. 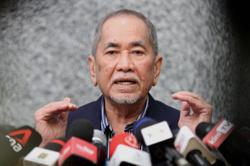